Ask not what Jake Watch can do for you...

...ask what you can do for Jake Watch.

Walk with me, Jake Watch. 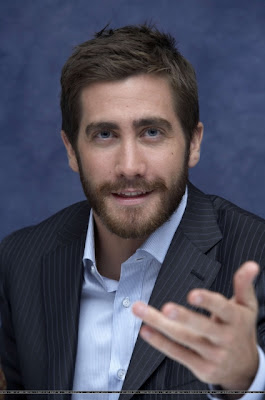 Do you see what I have done for you? I have recycled the somewhat (OK, completely) ridiculous schedule that I created for Jake's Zodiac press appearances to make life easier for you and your TiVo:

I have no idea why the PG From Seven Months Ago felt it necessary to put Jake's picture on a schedule that was addressed to him. Perhaps I thought he'd forgotten what he looked like? Regardless, the tradition continues.

(Also, I have a feeling I'll have to update this before it's all over. Dammit.)

So see? Wasn't that nice of me? With the schedule and all? Don't you want to do something for Jake Watch in return? Of course you do.

Ellen DeGeneres: Fill out this form.

Or visit the websites of any of the other shows that Jake is going to be on and write in. Tell them you want Jake to be asked about Jake in '08...or his Civil War album. Tell them we're offering free buttons to people who ask him such things. Tell them ANYTHING YOU WANT...as long as it involves Jake Watch and/or Jake in '08 and/or the Civil War album.

1. It's going to be two-thousand-and-fucking-nine before Jake's next confirmed movie (i.e. if you're waiting for the opportune moment, this is it).

3. Stewart has a rival Presidential campaign, which makes him an easy target.

Do you feel inspired yet? Good. Use that in your e-mail.

Pics from IHJ.
Posted by Becky Heineke at 10:05 PM

It amazes me that you all are still here writing about Jake after the whole poetry reading situation. It made me not as interested in Jake. I know it didn't have anything to do with Jake and that his dad was the mean one, but still, after all the effort you put into this blog it was a slap in the face. I'm just saying that whoever Brit or Prophecy are they seem to be talented writers. They put a funny spin on anything. I think their efforts would be better spent on someone who appreciates them.

Thank you for the recap PG, you're awesome at keeping us on top of things!!:)

I will send all the e-mails that are necessary to make Jake aware that there's a whole fandom out here that is supporting his presidential campaign or/and his future musical career!!;)

Even because I always do what JW asks to me. :D

Email duly composed, just waiting until next week to send it to Rossy so it doesn't get lost with his other emails, which is just as well as I forgot to ask about the upcoming Civil War albumn

oh my good lord, I've been watching jonny ross til the end lately waiting for him to say his line up for next week that may just include Jake! Finally, It's here!!!

OMG, it's gonna be Jake-week all over again! YAY!! *does happydance*

THANK YOU PG for keeping us informed!! As a non-US resident I would not have a clue about what was going on if it wasn't for you!! *hugs PG*

I've written e-mails to Letterman and Stewart asking them to ask Jake about 'Jake in '08' ... and I also took the liberty to ask whether Letterman could possibly ask Jake what his favourite sock colour is... I can't believe I just did that... Anyway, JW duty done for today? No? OK, I'll write them again... :)

Did you know Jake Gyllenhaal has a myspace presidential campaign called 'Jake in '08?

Of course you did because:

a) You are a hip happening dude who knows what's going down.

b) Jake's mad fans have been sending you emails about it.

We believe Jake should be President because:

1) He is an enlightened,socially aware, concerned human being whose choice of movie roles reflect this.

Please ask about his campaign when you interview him. Please also tell him he is the most gorgeous human being ever to walk the planet.

You guys are AWESOME!! Thank you so much for writing. :D I'm going to write multiple times myself (round 1 went out yesterday)...and Linna, brilliant idea about the socks!!! I'll have to add that in my round 2! :D

6.52, you have touched on some very interesting and timely issues, as we approach the one year mark after The Incident. We do take the Xenia-Approach (we do it for you!) but we also appreciate that you recognize the difficulties that approach brings along with it (i.e. the resignation that no one "higher up" gives a flying fuck). Thanks for your comment and we just might have more things to say on some of these issues in the near future... :)

Oh my goodness, I'm so excited!! I'm with Linna, it's gonna be Jake-week all over again! Woo-wee!! *jumps up and down*

PG, you ROCK! *hugs* Thanks for updating us about Jake's crazy-ass schedule! :-D I guess there's only one thing left for me to do right now.. :)

*off to write e-mails*

I wonder if fans of other celebrities arrange email campaigns before their appearances on various talk shows? Just a thought. Doesn't seem likely, as most of them (other celebs) are bloody boring and I can't imagine a single thing worth asking them. ;)

Don't forget to try writing to Ellen, also. She seems to have a terrific relationship with Jake and is definitely the type to take fans' concerns to the source! I'm off to pen my letter now.

I got an auto reply so I know my email got to JR.!

I hope I don't get fired. I just gave Ellen's show my work phone number! I had to, though--I'm certain to be at work when she tapes, though of course a producer or assistant could call ahead of that. But I have voicemail here so it's okay. I can't rely on my cell phone; it only gets 1-2 bars in this office. Anyway, email to Ellen sent!

^^^ I just wrote Ellen, too, and gave her my cell phone number...and I'm not allowed to talk on my cell at work. So hey! Maybe we'll get fired together! But I'm going to put her contact info on the main page. Thanks for finding that!

Okay, my effort for JR's show,

Far be it from me to tell you how to do your job, but with your upcoming interview with Jake Gyllenhaal I thought you wouldn’t mind if I brought to your attention a couple of interesting Jake facts that you might be unaware of.

Did you know about the ‘Jake in ’08’ campaign for the Presidency of the USA (to be honest, Jake might not know a lot about it either).

You might also like to get the jump on other interviewers and ask him about his upcoming Civil War Album (again, this project might come as a wee bit of a surprise to Mr Gyllenhaal).

If you wish to cover Jake’s stance on sock length and colour, and finally settle the ‘what does he smell like’ debate that rages, then we’d all be very grateful.

Ok I've just sent half-serious e-mails to everybody (and I hope they won't send me to the madhouse)in which I invite them to ask Jake if he's aware of JW support to his Presidential Campaign and his upcoming CD...and I promised them free buttons too!!:)

Oh and I put all the links I could, telling them to come and visit JW.

But I'm not at ease with Ellen's form, can a non-American fill it as well??

What a great idea!! I'm off now to send off my e-mails!

Xenia, I can't imagine a reason why international users would be barred from writing Ellen. Just put your postal code where it says "Zip Code" and see if that works!

So I'm at work, bored as hell, and doing yet another blog search on Jake's name...look what I found! Just when I had given up any hope that the exclusive info about tracks on Jake's Civil War album was noticed, some French blogger has brought it back to life. Yay! :) Anyone care to tell me what exactly the text says?

^^^ BWAHAHA!! That's the best one yet! I love how my Photoshop job has now been watermarked with "parisianboys.com." Snort. And this is an important landmark because JW ISN'T CREDITED (unless I'm missing it)! Therefore, someone else could see this and run with it and it wouldn't necessarily be traced back to us, which I think will make it easier to spread (because anyone who checks the "source" is going to figure it out). There may be life in this yet! :D

But I speak no French. So French-speakers, can you translate???

ROFL!!The Civil War album post was hilarious in its own right, but the way it's spreading across the internet is just too funny! you couldn't make it up! I can't claim to actually speak French as such, but from what I remember of the time when I could, it seems like it's just a re-hash of the original post here. It says that Jake is following the current trend of actors launching singing careers(apparently Jesse Metcalfe and Hayden Pannetiere are also turning their hand to music, but as I'm not a fan of either I've no idea if that bit's true or not. I bet neither of their albums will be as good as Jake's anyway;)) It says there's no confirmation yet but that it's true because the album cover has been released on the net!! I can't type for laughing!! To be fair, they might not be being serious, my French isn't that good that I would pick up on any irony, but I'm going to believe they're serious cos it's so damn funny!

Great idea about emailing all the shows btw.I'll try to email Jonathan Ross in the week:)

^^ OMG, this rumour about the CD is just so freaking hilarious!! I can't stop laughing! ROFLMFAO!!!

OMG, we're all gonna get arrested...LOLOL!!! This is SO fun.

Jesus, I haven't had this much fun in.... I don't know how long!! Someone HAS to ask him about his upcoming CD - it's just too good to NOT bring it up! Jonathan? Dave? Conan?? DO YOU HEAR US?!? ASK HIM!!! And please show him the album cover. I swear it would have him howling with laughter!

Thank you soooooo much for the schedule, I'm going to try to record everyone and burn them together...Vanna

Emails have been sent. Anxiously awaiting any mention of the upcoming drop of Jakes Civil War album and/or how his campaign is going!