The other day, some commenters were talking about the lack of, well, commenters lately and there seemed to be a consensus that interest in Jake is dwindling in these dry news days. bmg had the last word, saying, "It's all Zac Efron these days. Or so I'm told."

Being the type to philosophize on the heavy issues, I took this statement to heart. Is Zac Efron really taking over as pop culture's It Boy? Or is the lack of post material so overwhelming that we are reduced to creating entire posts out of comments that even other commenters have ignored? It was time for a Jake Watch Investigation.

My first stop was the vital information provided by my set of "Heartthrobs of the Aughts" Jake Watch premiere trading cards: 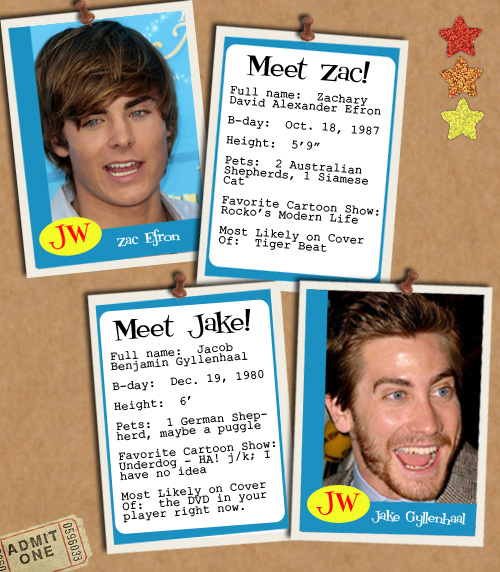 From this, I was able to deduce what elementary visual analysis had already told me: Jake is taller.

This wasn't enough to go on, though. I was forced to sit down and draw up a comprehensive list of everything I knew about both individuals and then compare their attributes in a highly biased manner. My results:

Primary Audience:
Zac: People younger than Zac (and PG - tell no one!).
Jake: People older than Jake (and PG).
Winner: Jake. Age and wisdom go hand-in-hand, duh. Plus, the lack of shame.

Official Site:
Zac: None. [Edit: Oops. Apparently he does have an official site but I can't look at it or else I'd have to change the winner.]
Jake: This mess.
Winner: Jake, by default.

Singing Credentials:
Zac: High School Musical 1 & 2; Hairspray
Jake: One failed Moulin Rouge audition and an SNL skit in drag.
Winner: Jake, but only because I'm making Jake the winner in all the categories.

Dancing Credentials:
Zac: See above.
Jake: The Santa Dance, the Donnie Darko Production Diary Dance, and This Dance.
Winner: Jake, because nothing defeats the Santa Dance.

What's Next:
Zac: Footloose: The Remake
Jake: President
Winner: Hail to the chief!

In conclusion: Sorry World Consumers of Pop Culture, but you are wrong! Zac Efron is not as wonderful as Jake Gyllenhaal. My highly scientific method of comparing the two has shown that Jake is at least 7 times better. AND he's taller!

And as for my own question...turns out yeah. This was definitely all done because there's no news.

Speaking of Jake as President, turns out this information has somehow been left out of his Wikipedia article. I'm scandalized! Regardless of this audacious oversight, Jake's article is being featured today on the Wikipedia main page. Unlike Zac Efron's.

Zac Efron info from IMDb and the knowledge gained from the embarrassing number of times PG has seen Hairspray and the two High School Musicals. Big thanks to Sarah920 for the Wikipedia info and bmg for the unintentional inspiration. ;)
Posted by Becky Heineke at 12:27 AM

Plus I have to add that in Italy we surely know Jake as "that kid from that gay movie" but don't know that Zac Efron at all!!:D

PG, I bow to your creativity and brilliance. This is the Jake Watch I know and love!

I just woke the dead aka my coworkers from laughing and snorting so loud when I clicked on ". . .and This Dance". Hee!

Yay! I have endured much ridicule since my first viewing of Hairspray, and which point I said, "THAT'S Zac Efron?!? I thought he was a dork, but he's awesome!" I was shunned (perhaps rightfully), but I figure it was worth it if I got a post out of it. :D Plus, I haven't had so much fun doing a graphic since I put Jake's head on Marilyn Monroe's body. ;)

Not that I'm a Zac Efron fan (although I have watched HSM on BBC World in a Dutch hotel room) he has two things on Jake:

Just Jared goes on about Zanessa. He doesn't go on about Jeese Gytherspoon.

But seriously: Efron looks like a Manga drawing of a eugenic foetus.

I am so out of things, alas. Because of my tendency to muddle up names, I read the earlier post that inspired this one, thinking, "Efron? Or Ephron? Do they mean Enron? Surely the writer means Zac Posen?" Need. To See. More Movie Musicals.

Wow bmg- I'm not sure what a 'Manga drawing of a eugenic foetus' is exactly- but if it means he looks kind of undercooked then I would have to agree. Altho' I am a bit jealous of his Australian shepherds if they look anything like the Australian shepherd Jake got himself in BBM.

But seriously they are pitting this half baked child against the Gyllygod? OK the 'dancing' at that gig was a bad mistake. But as you rightly point out the Santa dance sweeps everything before it with it's awesomeness.

And as for fixing for him to win (nearly) every category well done PG- the practice will stand you in good stead come election time. Gotta know how to rig a ballot with the best of them.

Also, I appear to have forgotten how to spell Shepherd. Doh.

How dare you speak ill of Jake's Official Site! The girls from IHJ could learn a thing or two from whoever put "that mess" together.

LOL! "That mess" is the most perfect way to describe Jake's official site and I laughed hardest at that. What a rox your sox post, Prophecy Girl! Brilliant.

Yeah, Zac Effron is cute but there is something so shamlessly zippidee-do-dah about him. He makes me want to watch Mary Poppins, eat miniature cupcakes coated in pink frosting and cartwheel across my front lawn, all the while chanting, "Just a spoonful of sugar..." Dude looks manufactured but he is fun to watch, nonetheless.

"Hairspray" was awesome but *sigh*, try as he might Zacy-boy will never get me to "hear the bells" quite like Jake G.
Whoa! What a rox your sox post, Prophecy Girl!

LOL, bmg! This is equally brilliant ;)

Yay! I have endured much ridicule since my first viewing of Hairspray, and which point I said, "THAT'S Zac Efron?!? I thought he was a dork, but he's awesome!"

But I'm with brownanddesperate. He may be a little airbrushed and have a confining squeaky clean public image dictated by the monster that is Disney, but the boy can put on a good show. :D

Well I must admit, I have been Zacattacked myself since I saw Hairspray back in July ... even tho I feel like a complete pervie for drooling over the cover of Rolling Stone with his sexy bod on it ... *siiiiiiiiiigh* ... since my friend John ruined my chance to go to Martha's Vineyard this weekend (yes Agents I was trying to covertly go to MV under the guise of going to a Chris Trapper/Martin Sexton concert but my Jakedar would have been on FULL ALERT) then I guess I will just have to watch endless reruns of HSM2 until I start doing that crazy "All For One" hand motion dance ... siiiiigh ...

^^^ No way! Did you really?! That's awesome (even though they'll probably hate me). :D I forgot to credit them because I stole all my pictures from over there. I think their forum has more members than IHJ...

Yes way ! I told them to take it "with a grain of salt" and for them NOT to come over here and leave mean messages ! Believe it or not, the tweenyboppers so far have listened to me ! ;) Just kidding ... I told them you were a friend of mine (hope that wasn't too far of a stretch) and that it was a cute comparison ... I think you did a great job ! :) *I LAUGHED* despite knowing that one Mr. G is buying M&M's and ice cream and water at places in Martha's Vineyard WHERE I COULD HAVE BENE IN ABOUT 3 HOURS if my friend John wasn't such a wimp and bailed out on me ... *sniff* So at least it made me laugh; they can not take themselves so seriously ...

Oh and PG ... if you watched HSM, you need to go on Zefron.com's forum and read the "awkward moments in HSM2" post ... there's OVER 200 (tho some are repeated several times) moments listed; some are pretty mean, most are pretty funny ... enjoy ! :)

I guess i'm too old to get Zac. He seems to be everywhere though, I guess people are striking when the iron is hot as they say.

OT: Jake was offered the part of Jack Kerouac in On The Road. Don't know if he accepeted it but what a great part:

Imagine Zac in the role, LOL!!!

Dee, we are totally friends! Bonded forever that one cold night in October. I'll never forget that my friend was outside when you arrived and she came running in and whispered to me, "There are people outside who know who you are!!" It was very exciting.

That list was hilarious! Oh, God. The golf course power ballad scene. I'm so happy that even die-hards can see the humor in that. :D

Yayyyyyy I feel special that you said that ... not just cuz I took a *GREAT* picture of you in front of some envelope tossing man ha ha ;) Isn't it fun to be notorious ??? Next thing you know, we'll be doing PG trading cards ... hmmm ... who shall we put you up against ? I'll have to think on that one ... my favorite cheesy moment was the "reflection in the water" during "Bet On It" ... I missed the whole boobs-in-the-face thing ... *sigh* I guess I'll just have to watch it again ;)

HA! I laughed out loud at that. ;D He really is so young!!

Anyone else remeber the photo of the young woman victim in Zodiac with the snazzy 60's hairdo? Is it just me or did the girl in that picture look exactly like Zac Efron? On my 3 times seeing Zodiac in the theatre, I continually made this comment and I just wanted to know if anyone agrees. Oh and *cough I'm only 19 cough* and I definitely prefer fabricated Jake news over actual Zac Efron news any day of the week. :)

OH my god PG, that was THE BEST! Its definatly on my favourite posts list! Man i wish i had internet when i was working away from home that would have been just what i needed!

LMFAO!! You never seize to amaze me with your posts PG! This was brilliantly hilarious! I’m so glad that our boy won, completely objectively and all ;)

You see, Sweetie, you don't even NEED news to generate such excitement about Jake! You are just a treasure! You always brighten my day (even considering I have to wear sunglasses just to sit at my desk, lol!). And, 1) NOTHING will EVER beat the Santa Dance, and 2) Jake's "happy trail" is the highway to "Hello!"