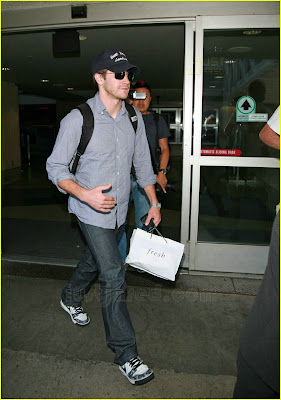 Can you spot the blatant stalker in this picture? I should hope so, because it is blatant.

More at JustJared.
Posted by Becky Heineke at 5:52 PM

Is it Asian man with video cam??? Standing on otherside of glass? Older blonde woman in other pics is with Jake. Naomi sent her to escort him and keep bad woomen away from him.
OT but NOT: Anyone else notice his Adam's Apple???? And he has such plump, sweet earlobes. I'd just like to nibble and nuzzle and.... excuse me...I have to take my meds...

And he has such plump, sweet earlobes.

Not only are they plump and sweet - they're fuzzy too! ;)

And it certainly has to be asian man with video cam. Or I really am stupid...

Well darling you got me beat on this one!

The one in grey coat who just walked past but whose reflection can be seen in the glass behind?

How do you know he has hairy earlobes??? I haven't seen those pictures...or I did, but I was looking at something else at the time...or were you THAT CLOSE...to see hair on his earlobes??? Now I won't be able to fall asleep...

How do you know he has hairy earlobes???

LOL Cina! And as she said, his earlobes are fuzzy, not hairy. Big difference. Hairy earlobes are what I'd see if I looked too closely at the retirees in the drugstore. *shudder*

Anon. 9:14 here again. I had a Great Aunt Enid who had lonnnnng hairs growing out of her chin. It wasn't a beard per se...just random hairs. She was quite proud of them. Whenever I see Jake in a baseball cap and a t-shirt with that shy, sort of hidden smile, I just want to grab him and pull him into the bushes.

Hairy ears are bad, especially when its my job to cut them off old men at work :( gu!
Loving these pics but hey. And the pop quiz is fun... this is a toughy....My guess is that the stalker is hiding in his shopping bad... yep i'm pretty sure... i also think it might be ALF! ;)

I guess Jake has left NYC again and I still haven't met him. One day Jake one day :)

I know you're leaving New York because of this horrible humid hot weather we're having for sunny dry gorgeous LA La Land.

Nah- you've all got it wrong. The stalker is in the 'Fresh' carrier. Any stalker worth their salt wouldn't be stuck behind some glass with a camera, being really obvious...oh wait the question was can you spot the blatant stalker. Ah, well, that's different. 'Course it's the guy with the videocam.

The good stalker is in the carrier bag.

Sure the man with the videocam DOESN'T work for Jake Watch...

He does bear a somewhat similar look as the person who was Steve Marrakesh's personal assistant now that you mention it....is it just me or does Jake look unusually cuddly lately???

I wonder if Jake bought products from the "fresh" store for someone else??? How sweet!

After looking at the set of pictures on JJ, I would say it's the woman with Jake that is "escorting" him to his ride, now that's blatant!

I would have to agree with heddaparsons! IHJ's Wondrous Stephanie said the "older woman" was supposed to be escorting him to his car, but didn't even know where it was!So poor Jake was lost. (Gosh, he really does need minders!) My surmise is she was posing as the escort and was really blatantly stalking him! There was one picture where, if you read body language and gestures and lips, you can tell she is really trying to entice him to come with her and he is saying, "Hey, lady, I have to pee!"
That flustered her sufficiently for him to get away..altho there are some stalkers would have only inflamed!

Did anyone hear any news if he took the part? Was it confirmed?

There has been no offical announcement yet.

If he does decide to do the play, we won't be seiing him anytime soon:

The season starts in October for this theater co. and there are several other plays that are going to be showcased there before this one .It also sounds like all the plays are for a limited run.