...to the lovely and amazing (get it?) Amy Macdonald of Glasglow. And what did Amy do to deserve such an honor? She wrote a song about Jake. A song! Like the kind that gets played on the radio! With lyrics and instruments! (I say all this to remove her from the inevitable comparisons that will be drawn between her work and the wondrous Bubble Boy rap that britpopbaby and I wrote...ours lacks the finesse of a finished radio-ready product.)

Congratulations, Amy, on joining the growing list of people named Amy who express their love of the Gyllenhaal via performance art and are rewarded by being mentioned on our little obscure corner of the internet. 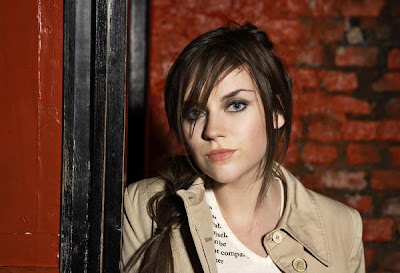 Amy calls Jake "the most beautiful thing ever" in a Guardian career recap (read it HERE). She also has a MySpace page (HERE) where you can listen to the Jake song (titled "LA").

And now that I've hyped it like crazy, I'll mention that Jake is only mentioned in the first line of the song and the rest of the lyrics are so-so at best. Alright, so it isn't quite as good as Jake in a kilt. It's still Scottish!

Picture nicked from MySpace.
Posted by Becky Heineke at 3:49 PM

I just.....I don't know what to say. I just don't. Her heart's in the right place. And he is. "Just the most beautiful thing ever!"

Would I be dating myself terribly if I remarked that Ms. Macdonald looks like Pat Benatar? I can't listen to her song until I get home, but even if it's abhorrently bad I won't hold it against her. Just look at some of the things Jake has inspired me to write! *shudder*

Can someone post the lyrics for this song for all non- native speakers of the English language?:) Please...

CMC! No, you wouldn't be dating yourself! I remember very well Pat Benetar...my mother used to like her. LMAO!!!!

Buzz-Photo has two pictures, one of RW and one of Jake. Said they both came out of the same bldg. minutes apart, got in two different cars, and went in different directions. LOL!!!
Both have big smiles...like they were having fun at paps' expense!!! LOL!!! (But the girl sure looks happy!)

(But the girl sure looks happy!) I meant RW.

Buzz-Photo has two pictures, one of RW and one of Jake.

A lot of pics, none together

Weird thing is that they are both being driven (Jake by that blonde PA) and their cars are similar, like the NY pics of the black SUV, this time it's gray.

^^^With all these conspiracy theories flying about, I feel like I'm back in my X-Files fandom. Where's Alex Krycek when I need him?

And good for your mom, anon 7 pm! Tell her I think she has great taste.

OK. I'm beginning to believe they ARE together...and they are having some fun screwing up the efforts of the paps to get a shot of them!
Think about it. It's broad daylight, middle of the day, right out in public and the paps cannot get their shot!!!! LOL!!!! Same car & same blonde that picked Jake up at the airport. Now Reese is driving in a grey vehicle, too. LMAO!!!!! What really puzzles me is that they were both inside what is a medical bldg...more foreign travel??? Or something else???

I guess the only thing you can do is try to have some fun with it. Can't even imagine what life must be life when even the simplest tasks, like going to the store, or a doctor's appointment, or going out to dinner, or going to someone's house, etc. things we all do and take for granted, must be plotted out and strategized. Nothing impulsive, everything planned to the last decimal point. Horrible way to live.

OK, we all know by now that Jake has ascended to that level of fame where he's only as interesting as the person he's dating...posting the picture links is fine, but if you want to discuss the implications of what was reported there, PLEASE take that to the forum!! There's a whole thread over there for that.

... and they are having some fun screwing up the efforts of the paps to get a shot of them!

You should give them more credit.

Hey Amy Macdonald! I think I love you! How sweet to write a song about Jake because let's face it - he IS the most beautiful thing ever!

I think there is something far more serious going on that we have only ever sort of glossed over....Jake seems either to be chewing gum a LOT or chewing on toothpicks..a LOT. He is orally fixated. And I believe it has soething to do with sex. But I don't know what.

And I believe it has soething to do with sex. But I don't know what.

You shoud email the city council and suggest they use it in their next advertising campaign- with a suitable royalties fee to yourself of course.

There is a lot of Jake and Scotland around at the moment. Especially the wonderful fan fic 'Going Home' over at livejournal. (Well OK it's Jack rather than Jake- but same thing really).

Could this be a sign? I believe in signs you know...

Well, the only "signs" I see are the fact that this young woman has enormous eyes, a brazen look, with entirely too much eyeliner and a full, sensuous mouth which is entirely too pouty, and her exquisite taste in all things beautiful doesn't extend to her make-up! Mostly, I'm not supporting her for an honorary lifetime membership at this time, until I can verify she has a boyfriend of her own and is settled and comfortable with at least three kids. And since that picture is from the neck up...plz tell me she does NOT work out on a regular basis, or at least that she thinks cycling is for sissies...and Jake must never go to Scotland for any length of time...just quick visits for interviews and red carpets with lots of security.

OT:
The Cannes screening schedule is out - ZODIAC will be shown on May, 17th. It looks like there are three dates

I guess it's a fairly safe bet to say Jake will definitely be in Cannes for a few days. He'll probably do some more media stuff to promote Zodiac openings across Europe and he'll be right there to schmooze and promote the film, along with Fincher and hopefully the rest of the cast, (Robert!!!)in hopes it gets some kind of recognition from the jury. Wonder how many categories it's eligible for and what the competition looks like?

Maybe Maggie will be in the UK for Batman and Jake will stop by for Zodiac....or not.

Heath was in London yesterday.

Jake would have my undivided attention as a Jake Watch agent if he ever came to Scotland. He would be totally secure. I would never uncuff him for a moment.

Guess which fan fics (yes that is plural- fanficdom is getting quite kinky at the moment) I have been reading?

joycedavenportyouaremyidol...could it be...TTTB???? For shame!!!!!
I'm a ALSE & BFF girl, myself, (food and young boys, an unbeatable combo!)...along with about a zillion others!

Am somewhat relieved you would be there to secure Jake.. I am more than ready to assist in any way possible.

What are these fanfics you are speaking of?!

I can't believe I didn't notice I misspelled "Glasgow." Er, I mean, I totally meant to do that! It was all for you, Joyce! Should I correct it? Should I not? This is going to take some thought...

Phoebe, I, too, have NO idea what these stories are they're talking about...

Sorry folks for bringing the fan fic virus here. Can't help it being so infectious.

Now that was cold!!