JAKE AND 'THE GIRLS' 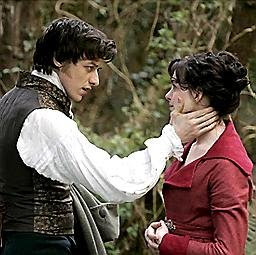 Jake and boobs in the same post! Surely not! Dear god, grandma, look away!
Remember how we asked Anne Hathaway to get Jake on the cover of Vanity Fair?
Well, she didn't. In fact, she's done nothing even like getting Jake on the cover of Vanity Fair but she did have the good grace to tell us an embrassingly fantastic ancedote about the Gyllenhaal when pressing the rounds for her new film Becoming Jane.
Thanks to the eagle-eyed forum goers who spotted the story and kokodee for finding the vid:
http://del.interoute.com/?id=4a207399-437f-4c72-9665-08707d15cf50&delivery=stream
I'd also like to remind all UK viewers to watch Comic Relief and donate your hard earned cash because the rich celebrities are asking you too. Seriously, Ant and Dec are crying and Kate Thornton really needs this gig.
Posted by britpopbaby at 7:56 PM

i know, kokodee needs an agent award for her amazing sleuthing skills in digging up that video.

whoddathunk a salacious news item from an unreliable online source, quoting an american with phrases like "get my kit off", "dodgy instincts", and "the girls" (ok that last one is very american) was ACTUALLY accurate?!

i know some ppl may give her some flack for sharing a story like that but i love AH for that adorable foot-in-mouth disease she seems to have (see also, bbm oprah special).

I can totally imagine Jake asking to do that, and like ive said b4... he wouldnt have to ask me- id be asking him! haha

Someone said to me yesterday that I had no way of knowing whether Jake was actually nice in real life and he could actually be really rude and arrogant. I'll be sending them this vid tomorrow. :)

I think Jake employed a brilliant strategy!! I mean. It would have worked with me(!). First he touches her stomach, then her sternum, then her back,etc. Sounds like his hands were roaming all over the place...then he asks very sweetly can he ...and she says:"Yessss!!! Touch them!" Jakey, you are such a devilish clever fellow!

What's the etiquette if someone does try to slip a tongue in it?

Oh, Jake, you're so very thoughtful & so very P.C., in the nicest way. That's such a funny story. Reminds me of that college that promulgated laws several years ago requiring people to ask, at every move, if what they were doing was acceptable to the recipient of their attentions. (Can't remember what college that was.)

hmm... just tried to play the vid again but the link doesn't work for me anymore?

It's working just fine for me.

I saw "The 25 sexiest people on the planet" yesterday on MTV. Jake's 8'th,and they cut the moments when he said smth like "Yeah, I do feel myself as among the 25 sexiest people", "I fe-e-el sexy".(I wonder where did they get it all?) and I've got to say two things: yes, I've lived up to the sweet moment when people in my country learned smth 'bout who's Jake Gyllenhaal.And the second one:oh my God, people are getting aware of who's Jake Gyllenhaal.I mean I've been the offbeat loving unknown underground actor. What is it gonna be when he'll become as pop as Brad Pitt? Every girl from fourteen to eighty will dream of having sex with him!There will be Gyllenwatches on every cover of a magazine!There're gonna be Gyllencups and Gyllenshirts everywhere! If you say"Jake's my favourite actor" everybody will say "C'mon, who don't love him,it aint new" or even worse "He's just an ordinary holliwood surgered fake, forget of him". Jake Gyllenhaal will become an enormous empire, brand, which legions of peolpe will work on. And someday we'll be washed by the wave of millions of fans, lost in the mass of hysterical girls and gay boys, attracted by Jake's celebrity state and shining body.I know it 'cause it is the sign of real popularity when people from the third world know who u are. What, what is it going to be with Jake as WE love him, with us?

Hey! The more popular Jake gets, the more often we get to see him. That's the way I look at it! All these "lulls" between films is killin' me! So if I get to see him on more magazine covers, and TV shows and lists and stuff that's fine with me. I mean. He doesn't "belong" to me! He doesn't hang out with me or eat dinner at my house LOL!!! At the end of the day, he is a film star. I'll adore him, admire him, gaze upon him and enjoy the phenomenon of Jake's rising popularity and hopefully, he'll make a LOT more films, too.

I too wouldn't mind touching Anne's girls. I mean they are strangely hypnotic.
Jake-weird posted those infamous see-through photos of her, and I could really understand Jake's need to 'reach out and touch'.

I'm prepared for some defections when Jake achieves greater fame. Some people think like a former boyfriend of mine (Jim, where are you now?) who only loved indie bands when they were obscure. As soon as they achieved fame, he stopped caring about them. "But isn't their music the same?" I'd argue. "Yeah, but ..." he'd trail off, quite unsatisfactorily. Some people are like that about their passions.

Some people think like a former boyfriend of mine (Jim, where are you now?) who only loved indie bands when they were obscure.

Is that why Jim is now your ex? Lol!

But yeah...the eternal artist's dilema of selling-out. I watched a programme recently (can't remember the name)the subject was how you could create that elusive blockbuster, without sacrificing artistic integrity. And the interviewed some stars including George Clooney. He said that of course you had no sure-fire way of knowing something was going to be a hit. The best you can go by was to choose good scripts because even though things can go wrong along the way and you end up with a bad film, no-one's ever made a good film from a bad script. Then there comes a point in your career where you have to trade-off. The studio want your name to guarantee an audience, you need the finance to produce/direct/write your own project. Technically you're selling out, but you hope that your audience get something out of your fluffy movie...be it a few laughs or just getting to see you all sexy and suave. And then stick around to support your more serious fare.

Anne is adorable! What a cute story. When I first read about this I wondered about the phrases "get my kit off", etc. Thanks for the link!

I'd still like to think Jake used strategy!!!LOLOL!!! It makes him all the more mischievous, bless him. I like that she called them "the girls." Annie is cool. Too bad she is in a serious relationship with some restaurant guy.

News Bulletin: Apparently the screenwriter for Captain Marvel said that there is no movie, no casting list, no discussions with Jake. In fact, no one has talked to him and he's not in the running and of course if they had a casting wish list he'd probably be on it only there isn't even anything like a script or storyline yet. So. No Captain Marvel. It was all total BS. But we knew that. That's why we are JW and they're not.

LOOL, what a clever man. I wonder if he uses that strategy wwith all girls that he meets :P.