GOSSIP! WELL WHEN I SAY GOSSIP...

...I mean elaborate lies, but what the hell, it's Tuesday! (Golden Globes action coming later although be warned Jake was not wearing that beautiful dress he wore for SNL)

Reese and Jake Play Santa to Each Other! (not as sexy as it first sounds)

Christmas was merrier than Reese Witherspoon, 30, expected, thanks to her co-star in the upcoming CIA thriller Renedition, Jake Gyllenhaal, 26! (way to use grammar, NE). Down in the dumps since she filed for divorce from cheating (woah! slander much?) husband Ryan Phillippe, 32, in November, Reese was all smiles when Kirsten Dunst's ex-beau (all that work, Jake and this is how you shall forever be remembered), suprised her with a ladies' Schwinn bicycle a few days before Christmas while the two were on the LA set, a source reports! (oh, good old source!). Jake, who's been photographed recently cycling all over LA, even (actual quote coming up) "told her he could help her get reacquainted [with biking]," adds the source. "Reese was flattered beyond words and said maybe they could go riding together after New Year's." As a thank you, Reese presented Jake with a gift certificate for an expensive caviar firming facial at The Beverly Hills Hotel Spa by La Prairie (ooo, the gift that keeps on giving!). Sounds like Jake and Reese are becoming fast friends! It has already been reported that the Brokeback Mountain star had a crush on Reese! (oh shut up).

Usually I wouldn't have given this sort of report a second look but something just rings true about Jake buying bikes for, like, everybody. I bet even Ramona got one. 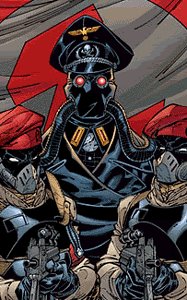 On to more serious issues. Yesterday, Prophecy Girl noticed that all the highlighter pens have vanished and this guy was seen using the ladies bathroom. He did not wash his hands.
Posted by britpopbaby at 10:10 PM

haha at the last paragraph!!! that cracked me up!

Can i have Jake play santa to me next year please? I put my order in now and ill be really really good, (or naughty, whatever it takes) to get my christmas wish!

The Enquirer doesn't have to be lyiing, per se. Maybe they did exchange gifts! So what!!!! I think the caviar facial is a bit much! BTW: The truth is a defense in libel. So I guess it would be up to Ryan to prove he wasn't a cheater? Hey! That guy looks like Cousin Eddie!!!! (Not washing his hands was a dead give away!) I thought his parole was denied! At least that's what granny said. But Granny sometimes lies.

As much I would hate to see Jake falling in love with someone other than me, I really Like Reese. I really don't see her bike riding in the mountians though, but it was a nice gester of Jake.

I thought i saw someothing strange!

What a subtle way of telling someone they need to get into shape!! Bless Jake, ever the diplomat ;-)

I think it's Jake in disguise. I guess he didn't want to repeat his mistake with the movie script. But what the hell is he doing not washing his hands?? DUDE?! Seriously!! BIG no-no.

But thanks for the nice dream last night anyway. Oh my...

who or what is ramona?

I saw him at the sink,he's washing now. Just very dirty,needs to do alot of scrubbing.

something just rings true about Jake buying bikes for, like, everybody. I bet even Ramona got one.

I want to get a bike from Jake too!! *sulks* Okay, I hate biking, but that's not the point. Jakey? Please?!

Yesterday, Prophecy Girl noticed that all the highlighter pens have vanished

I think not young lady

^^ Is caviar that tasty?! Never tried it myself, although i think if anything was on jakes face id lick it off....

who or what is ramona?

Male cyclists may not be sitting so pretty: Riding a typical bike seat can lead to impotence, researchers say.

Sitting on a narrow, pointed seat can crush an artery that controls blood flow to the penis, said Pedram Salimpour of Boston University School of Medicine.

''When you sit on a bicycle seat, you are sitting on the artery,'' Mr. Salimpour said.

His research shows that impotence, which may affect as many as 30 million American men, occurs more often in cyclists than in runners.
(NewYork Times, 1998)

"although i think if anything was on jakes face id lick it off...."

haha, the NE stories always sound a bit like fanfic to me. reese is cute, jake is cute, they're doing a movie, let's make up a story about them exchanging gifts and jake having a crush on reese! PRINT!

anyways, does anyone remember an old article where jake said something like one of the worst things he's ever been convinced to do was to get a facial, and how he hated it?

an on another note, was anyone else shocked to see at last night's GG's how much weight reese has lost since last year? i'm a little worried for her, and i blame RYAN! (i guess we all do a bit of slandering, huh =P)

Reese sure has gotten tiny! I do like her though, so if there's truth to it and Jake likes her, I guess I"d approve.
It is kind of cute though..if its true, obviously he wants to spend some time with her, right?

I can't think of anything much I wouldn't approve as far as Jake goes! Wellll, there are a couple of things...he knows what they are... Jake???

i would give him a chocolate facial mask - very fashionable recently and very efficient. and how nice it would be to lick it all off!

Why would you lick something off Jake???

Why would you lick something off Jake???

ok, i admit it's not the chocolate i'd be focussing on. it'd only be an excuse for the licking itself :D

Ha, even the RUMORS are nice. But a fish-egg facial? Wha?

If that's true, I think it was a very nice gift. And if he did get together with Reese, I don't think it'd really be a bad thing. She seems level-headed and sweet.

JadziaDragonRider said...
This comment has been removed by a blog administrator.
2:28 AM GMT

"Your fat. Excercise more and you won't be fat anymore."

"You're getting craggily around the edges, bub. Go get a tightening facial Methusala."

Anyway, they aren't very romantic gifts. I do like Reese so if he HAS to have female companionship it can be here I s'pose *gumbles*

I'm sure 'caviar firming facials' are the latest in a highly innovative skin care range, but I lost my breath giggling at that!

I think Reese's gift says "I hope I'm not implying anything about your orientation, but this is something I probably won't get around to using - here you go."

What a cute story and I can see him buying Reese a bike, but a cavier facial??