IN CASE YOU MISSED IT...

Because every post this week has had some comment along the lines of, "OMG, Jake's hosting SNL!" here are a list of topics that have already been discussed but didn't get their own post:

1. OMG, Jake's hosting SNL! January 13. Musical guest: The Shins. If you don't know who they are, rent Garden State (although any agent worth their salt already owns it because Agent Sarsgaard is in it). Tickets are nearly impossible to come by, aren't available to people under 16, and even if you do snag a ticket, you aren't guaranteed entry, so I wouldn't plan an impromptu trip to New York over this. I mean, I'm not, and I'm nuts, so that's how grim the prospects are. New York agents, it's all on you.

2. OMG, Jake went bike riding on Mullholland Drive on his b-day! That's actually not that exciting because we see Jake in spandex all the time. There are some pictures...somewhere. Whatever. You can find them if you're really interested. 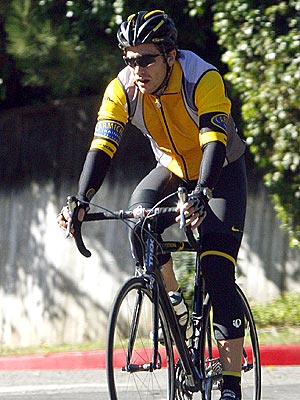 3. OMG, Jake may have gotten socks for his b-day! That is exciting because it would appear someone is honing in on our territory and that's not cool. (Unless it was Peter; he is authorized, after all.) Read all the juicy details here. We've got a team working recon to see if it's true. I hope it's not or else I'm going to have return that tea set I got him for Christmas.

4. OMG, Uncle Jack Nasty bit the dust last night! And it only took him five days to catch on to all the controversy. He was not a very good Jake. We will miss him anway. Sort of. OK, not really.
Posted by Becky Heineke at 2:07 PM

hahaha, well played, PG. i admit to being one of the "OMG!" news bearers. i know the SNL news was posted like half a dozen times, but i was so excited about the part about the shins-- i thought it was worth an extra mention?

anyway, smurfette here, bringing you a few more news bits of non-breaking type, just cuz it's a cute, rare referebce to jake's donnie darko days-- and they made the same connection as me heh =):

Are the Shins secretly famous? We know lots of people love them, but LOTS of people must REALLY love them as they’ve apparently secured a spot playing SNL in January with Jake Gyllenhaal as the host. Will indie-rock loving, Donnie Darko obsessed teenage minds be able to sleep at night between now and January 13th? Not likely.

Congrats, agents, on the complete and utter destruction of UJN.

When agents set their minds to something, they get it accomplished!

Any chance the aforementioned agents (now with free time on their hands) could work on getting Jake for my birthday? - It's in less than two weeks!

One of many phony Jake Myspaces has bit the dust! He was the most entertaining but I did become concerned when paeople like Alfre Woodard's daughter, several industry types and a collegue of his fathers actually thought that was really him! Is I should add scary to entertaining.

I would like to know when the photo of Jake riding was taken? Was it really taken on his birthday? Or from another time.

I just love Jake Watch, I can't tell you how much I have laughed, often very much needed

I hope you all have a happy holiday!

OMG! This is an excellent re-cap!
All the edge of the seat, breathtaking excitement that is life according to Jake. Just one thing. Anyone heard the rumor about Jake being kidnapped by Sharon Stone and held in bondage under a volcano?

I would like to know when the photo of Jake riding was taken? Was it really taken on his birthday? Or from another time.

Yup, that pic is actually from December 19. There are a couple others at PerezHilton but (of course) they've got writing all over them. It should be against the law to defile pictures of the Gyllenhaal.

Pics of Jake and Chris cycling in L.A. Yesterday.

PS: Why must Perez write all over every friggin picture??

"Head on a plate"
plots a reemergence...

Simon!!! LOL! Thank you, I really needed that laugh after reading the most emotional ending of a fanfic in a long time. That helped me dry my tears at least some.
You're such a hoot! *hugs*

I don't understand the bitterness and apathy coming through in these posts the last few days (by BPB and PG).

brillant! Its about time ujn was brought down!!

I don't understand the bitterness and apathy coming through in these posts the last few days (by BPB and PG).

And YAY! We brought down UJN! The power my pretties, the power!

i think anon 6:29 is the same person who didn't get the joke with the birthday post. sweetie, haven’t you heard? wit and sarcasm is our way of showing our love for jake, who i think will prefer an intelligent quip acknowledging the bizarre-ness that is internet fandom over incessant squeeing from his fans anyway (is squeeing a word?). at least, that is my hope, but what do i know about who jake really is? i just come here for BP, PG, and anneka’s reviews.

7:47:PM: Granted she could have placed that item in a bag but honestly, I never understood the Dunst hate. There are more actresses out there that deserve your wrath. What has she ever done either than date/live/have sex with Jake for about 3 years. Oh, I get it. How juevenile. Get over it already.

Well to quote PG from the entry today...Whatever.

From Smurfette:
wit and sarcasm is our way of showing our love for jake

The posts of the last couple of days have neither been witty nor sarcastic. Just full of apathy and underlying bitterness. Shame.

Uh, I haven't really noticed a shift in tone myself. We're pretty much always like this. Just because Jake is perfect in every way doesn't mean we can forgive him for being a celebrity. :)

The posts of the last couple of days have neither been witty nor sarcastic. Just full of apathy and underlying bitterness. Shame.

You are misinterpretating our writing. Your problem. Not ours. Shame. End of discussion. Take it into the forum if you'd like to make any more points on the matter. You can start a thread in the 'JW' catergory. Thanks.

What BPB said. We're not his cheerleaders.

We're not his cheerleaders.

cuz agents are so much sexier, whereas moaning cheerleaders are... odd...? heh

I am all trembly with excitement. I've been a LOUD proponent of the Jake on SNL Initiative since I started going to Eyelashes. It's just a natural fit ya know.

JadziaDragonRider said...
This comment has been removed by a blog administrator.
9:09 PM GMT

REALLY need to start reading before I start popping le shit. That way I can get everything out in one post.

Let's all get into the Way Back Machine and go back to the time before every post had at least one humorless git trying to be all judgey. Let's take a snapshot of that time and keep it with us always.

Keep up the good work BP and PG!!!

And if I don't get a chance to say it before Monday...Have a wonderful Christmas/Holiday everyone!

HAHAHA!! I went to the NBC official SNL site and did a search on "Jake Gyllenhaal" to see if it said anything about his upcoming episode. Guess what I got?

"Did you mean: Joke Colonial"?

When will they get it straight, I am not some cheerleader, I'm a roadie.

and it's a long road.

SNL - well its about time is all I got to say about it.

Its going to KICK ARSE!
I hope they make him sing.

I'm not a roadie either, Tbl, that's laborious, as Bpb said I'm not that interested in cheerleading, and the groupie option, not, more consider me as a band aid ;)

Way to go BPB and JW agents. UJN was an abomination. Our Jake's persona is safe for now and always I hope.

OT but NJ governor Jon Corzine signed into law the same sex partner bill today to take effect in Feb. We are now the third state in the nation to do this. I love to think that Jake's role as Jack Twist and BBM had a hand to tip the scale. I know that this story changed me forever and I hope that we continue to make our country a place where no one can judge who we choose to love.

Merry Christmas, Veeveevee, and everybody else, btw, Veeveevee in case you didn't notice I replied to you in the "Quote of the week" post 18th Dec.

YAY! Jersey is my home state! So proud of Jersey today.

Mpom: THAT ROCKS!! GO JERSEY!!
My uncles are gay, hopefully New York will follow New Jersey's footsteps. (God knows it would kill New Yorkers to fall behind you guys...)