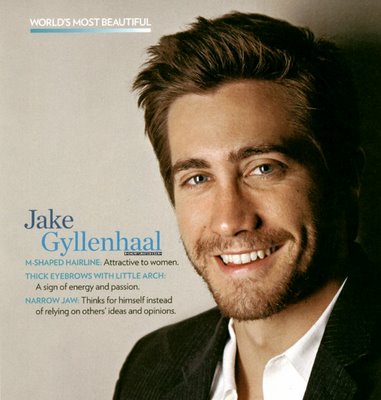 America's People magazine has annointed Jake one of the fiftiest most beautiful humans on the face of the earth. When I see these type of things I think it should be made clear that they are the most beautiful known people in the world because what if there is some ancient undiscovered tribe living high up in the Himalayas or deep in the Amazon and they're, like, really hot? Obviously I'm referring to the other 49 people here because Jake is undoubtably the hottest man alive, Amazonian demi-gods or not.

The people at People have also picked out some unusual features of attractiveness. M-Shaped hairline? What about the smokin' body, love of animals, the smokin' body and million dollar bank account? God, they're so superficial.

And what about a smokin' body and eyes to drown in?

Such a double edged sword. Yes, THE most beautiful man, to be sure. But these things make me want to grab him & hide him away (Not THAT grab, in this case), lest he be spoiled by becoming "common." I've always enjoyed Jake being a sort of acquired, or alternative, nay indie, taste, if you will. Aw, who am I kidding....I don't like sharing! That's all I need: hordes of generic, pastel wearin', Middle American People subscribers lusting after MY man. (Sorry, Britpop...OUR man!)
The bright side: Maybe people will stop saying, "Is that Spiderman?" when they see my screensaver.

Tankergirl, you totally reminded me of my first viewing of October Sky many, many years ago, when I sat there thinking wow, that guy looks just like Tobey Maguire. Was I ever so young? Sigh. Also, narrow jaw? What? How about the most beautiful eyes in the history of the universe?

So, let's summarize some: Most beautiful eyes. Thick, dark black sexy hair (let's not forget M-shaped hairline!). Jake's mouth and lips that seem to plead with you to kiss him. A smile that melts you if you stare too long. The smokin body of course. Beautiful in as well as out, cause we see glimpses of his sweet heart and soul. He's respectful, and earnest. Funny as all hell, hardworking, one unique and talented actor, a hottie Hollywood movie star, an intellect that rocks, confident, charming...... The list of characteristics that make Jacob Benjamin Gyllenhaal (our Jake) beautiful is ... endless.

I don't think anyone will ever mistake him for Tobey Maguire again. Jake has developed into one hot, gorgeous guy.

For me it's the eyes and the smile. The inner beauty comes out through them.

Jake G. may have started out as a guy who looked like Tobey Maguire, but cost less on a film budget (it's something about the heavy eyelids and the eyebrows, which seems to have been a mini-trend in male movie star looks). But Jake G. has long since grown up & become his own inimitable self. Those eyes, that thick head of hair, those lips & teeth, and my God, those abdominal muscles, when he's really put the work into honing them ... not to mention the legs. He's the sexiest smart liberal guy I've ever seen. And he's got a comedic potential that's still largely untapped & great poise & presence when he's "live." I can't wait to see what he makes of himself. I feel he's only just begun.

Are all the write-ups on this People list so clinical? I'm guessing they are, but at least we know what makes Jake truly beautiful, not just a "hey laydees, check out my 'M' zone!" I'm with tankergirl in that I thought I had been drawn to looks that were pretty quirky and an acquired taste. Maybe in the early days, but not now that all those features have found their...sigh...place. His eyes definitely should have been mentioned! They're not just his eyes, lol, he uses them in his acting, it's incredible.

I think another attribute that makes him consciously/unconsciously attractive is that still-potent mix of very boyish and all man - physically as well as personality-wise. Deadly.

Beautifully put, all of you. Mossy, I especially liked what said about his boy/man-ness. He somehow manages to be an adult without being a "grown-up," and that's VERY hot. Also hot is his tendency to stick out his tongue. If People was going to give such a sterile analysis, the tongue should have been their talking point, not his hairline.

The hairline thing kinda pisses me off. Like they went out of their way to put the most randome thing in that write up possible. His eyes, lips, legs, abs, smile/grin, and hair are his selling points, dumbasses!

Ooops! Just remembered.I said James Blunt has no vocal chords.Well,he doesn't,that's why it's much safer to write the above,then listen to a strangled cat.Not that i have ever strangled a cat.

It's just been pointed out to me that the so-called "attractive M-shaped hairline" is better known as the historically not-so-attractive "widow's peak", lol.

These lists are always lame and mean nothing, but what a shame Jake was included in the face analysis section. I looked at this issue today and he should've been in "the whole package" pages because that's what our man is.

I'm planning on rallying for Jake as Sexiest Man Alive when People starts getting ready to put out the issue, along with the rest of the Gyllenhaal-ics on myspace, if anyone is interested...

Of all the letter's on Jake's body, I think I like the V the most.