HOW MUCH FOOD DOES ONE MAN NEED? 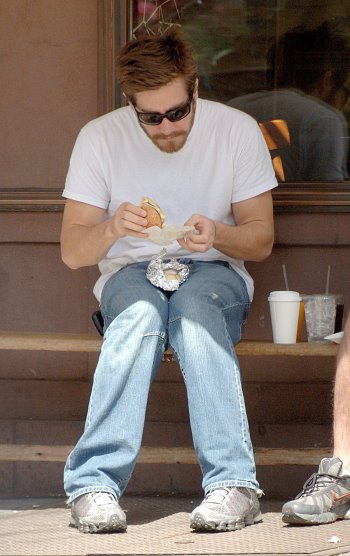 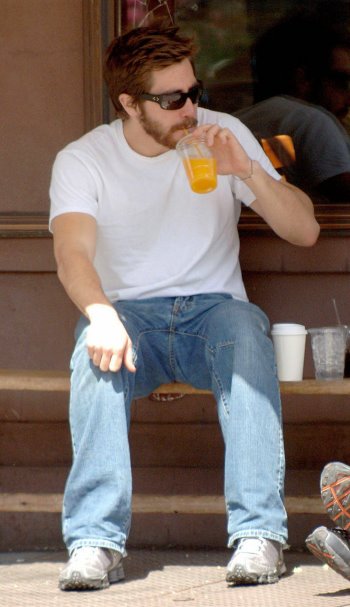 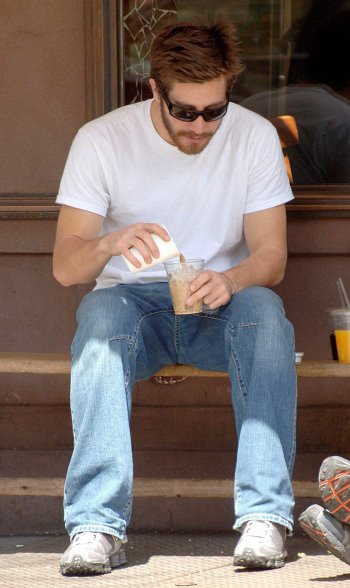 (pictures from iheartjake)
Posted by britpopbaby at 10:04 PM

Check Saveourdill It is already there, plus some carrot growing action. Check it out:

Oh yeah, did you put up the link yet, britpop?

don't men look really funny when they put their knees together like that? Kind of girly? Aww, Jake is being girly

Oh, he looks so normal and adorable! I hate pretty much everyone who got to walk by him on the street while he ate his lunch. Life is just not fair.

Love the site and all m'dear, but I have to tell you: the new format is incredibly difficult to read. Color combos (with background)=some invisible text. Everything centered=it's outlawed in graphic design for a reason.

I wouldn't care how it looks except I can't read it! The old one was fine.

Woah... for a budding chef he sure eats out a lot!

RE: cooking v. eating out.

He doesn't LIVE in NYC, for one thing. What kind of kitchen is a hotel room going to have? Or Maggie/Peter's apartment, for that matter? Or say he is staying with buddy Chris the chef. I have a feeling you don't just barge into an actual chef's kitchen and start whipping something up--probably the professionals are tetchy about that sort of thing. Or they are sick of cooking (it's their job day in, day out) and besides, they seem to be out and about CONSTANTLY, what are they going to go home in the middle of the day to make a gourmet meal? All these shots are daytime, too--probably they make something grand, or go to eat somewhere grand, for supper.

Also, why the hell am I all het up about something so stupid that no one is arguing about to begin with? Oh, maybe because I have been awake since 5 am and it is almost 1 am now, which means I have to get up in 4 hours and really should go to bed now.

Please ignore this post. Unless you find it fascinating for some reason, perhaps because you have been up since some ungodly time as well.

Love the site and all m'dear, but I have to tell you: the new format is incredibly difficult to read. Color combos (with background)=some invisible text. Everything centered=it's outlawed in graphic design for a reason.

I wouldn't care how it looks except I can't read it! The old one was fine.

Do you have Firefox? If so, it should be fixed for you now (prays to the Gods of HTML). If not, more work needs to be done!!

I find the way he's sitting totally adorable. God I wish I was there with him on that bench. I too love how he seems so ordinary, just hanging around. I want to hang around there with him.

It's cos half of it goes to Dill. He's a growing boy you know.

I don't know,but as long as though biceps keep growing eat away Jakey.

Damn...with that combo for lunch his farts must REEK!