Jake had a brief cameo on the season premiere of SNL last night. You can watch the video HERE and/or download it for your personal use from Team IHJ (of course). All this brings to light the question: does Jake's resemblance to Mahmoud Ahmadinejad make him more suitable than other Presidential candidates to diplomatically handle the threat of nuclear war with Iran? In addition, will the picture below make Jake more accessible to disenfranchised voters? 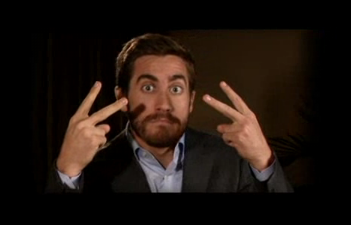 True, his cameo was nothing more than a political ploy on Gyllenhaal's part, but one expertly executed and sure to have long-term results over the next year of campaigning. I'll bet the other candidates are wishing they looked like Ahmadinejad about now...

Also, not to worry, the release of Jake's first album ("Jake Sings The Civil War: An Acoustic Collection") will not interfere with his political schedule. I say this to assure those other online communities who have recently shown interest in Jake's musical career.

Thanks to PG's friend Melissa for watching SNL last night!
Posted by Becky Heineke at 12:31 AM

I swear last week when there was all that controversy over Ahmadinejad making a speech at Columbia Univ.and his face was plastered all over the NY papers, I passed by a newstand and said "What the hell is Jake doing on the cover of The NY Daily news'"??

I was watching last night and I just started screaming and jumping up and down. How fucking funny!!! They mentioned him then I saw Adam and I kind of had a feeling then bam there he was. See there are good reasons to stay home on a Saturday night after all.

Also, not to worry, the release of Jake's first album ("Jake Sings The Civil War: An Acoustic Collection")

bwaahahahahaha. This will never get old. :-D

And I still can't believe someone take JW seriously...;)

Cool, now the video is on dlisted with props to "Jakey G"

I see I wasn't the only one who saw a resemblence!!!

I just love that Jake is game for silly shit like this, you know? It says a lot about his funloving personality, I think.

So, PG, when is Jake's first single going to be released? Is it true that it will feature guest vocals from someone very well-known? And that a special edition of it will be included in select Kellogg's cereal boxes? Come on, you can tell us. ;)

^^^ HA!! I was starting to be sad that everything was being taken down, but YES! The rumor lives! Dude, I think I'm going to have to make a new post. I feel like the public will want to know the answers to your questions since the public is so interested in Jake's recording career. I'll have to make up a track list, er, I mean, I'll have to exclusively unveil Jake's track list. For the record, Civil War songs = AWESOME! :D

Ha, ha! That was some funny shit, thanks for posting it!!

PS: The singing rumor is stasrting to spread, too funny!1

A surprise musical guest is writing lyrics for "Ashokan Farewell" & it will be the second single released from the album.

The singing rumor spreading is the funniest shit ever! Excuse me while I ROTFLMAO!

Jake's resemblance to the president of Iran is a little... disturbing, I have to say... Heh. =)

OT: Jake, Reese and Peter were all at the Four Seasons at the BH Hotel in L.A.on Friday for the Rendtion PR junket. Things are gearing up for PR for this: He will be taping the J. Ross show early next Friday instead of Thursday for airing for later in the day. Hopefully the following week he will be doing some PR in the States before he heads off to Rome for the screening for their festival on the 21st.

Last one, before I go to the gym! Hollywire. You seriously need to keep running with this, PG. I am so excited!

This is just too freaking funny. :)

Cherita! You're SO good at finding these!!! I LOVE IT! *evil laugh* OK, I'll try to get together a new post tonight with some "specifics." And nice anon, I'm SO using your Ken Burns bit. I laughed heartily at that. ;D