Jack Twist's mustache has recently added its name to the growing list of mustaches supporting Jake Gyllenhaal's 2008 Presidential run. It has joined the list at number 5 behind: 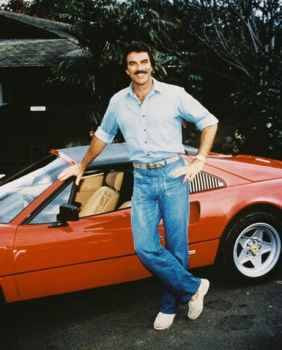 1. Tom Selleck's mustache. The classiest mustache in all of pop culture, this mustache is interested in Jake's ability to bring a sense of style to the White House. 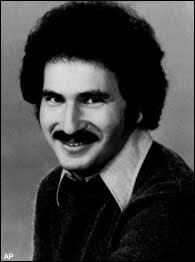 2. Gabe Kaplan's mustache. The "Welcome Back" mustache still remembers the gas shortages of the 1970's and is looking for a candidate who both drives a hybrid and looks good in tight pants. 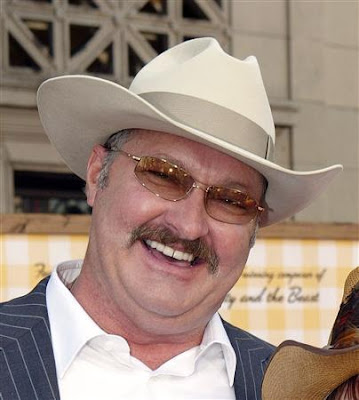 3. Joe Aguirre's mustache. This was a surprise to many but as it turns out, the mustache is quite the liberal thinker. And where the mustache goes, the man must follow. 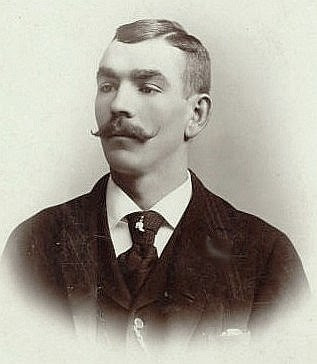 4. This guy's mustache. Because anything that well-coiffed couldn't possibly resist the Gyllenhaal.

A noticeably clean-shaven Jake Gyllenhaal is photographed below looking over his mustache supporter list as published by Jake Watch: 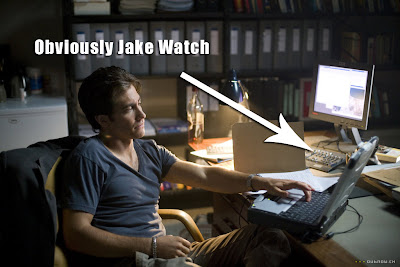 He's reportedly pleased by the growing list (no pun), but still concerned that Geraldo Rivera has not yet pledged himself to the campaign. 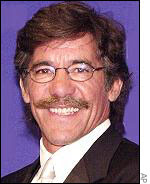 Did a manlier mustache ever exist? We think not. Let's hope Rivera gets his head out of his ass and jumps on board soon.

In other news, Jake Watch and the Jake in '08 campaign are going on a tiny hiatus so that britpopbaby and Prophecy Girl can devote every waking moment to Harry Potter and the Deathly Hallows. And you know what happens to Muggles who post spoiler information on Jake Watch? Avada fuckin' Kedavra, bitches. Keep it in the forum! 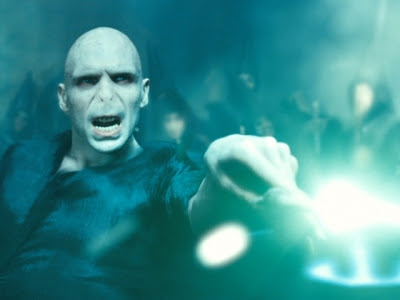 Posted by Becky Heineke at 8:41 PM

The mustasch is in good company, I'm surprised mine isn't listed. I will trust that you guys will use this in a positive way for the upcoming campaign.

And to all JW readers: like PG and Brit said: Keep all Harry Potter spoilers in the forum, YOU GOT THAT!!

OK, this Harry Potter related but no spoilers I promise! It's all about fans waiting on line for hours for the book. I asume that you guys were the many that were waiting! Enjoy tour hiatus/vacation!

From the NY Times:

By MOTOKO RICH
Published: July 21, 2007
There has never been anything quite like it, and nobody knows whether there ever will be again.

All over the world, fans await the final installment. The Times reports in images and posts.

An Epic Showdown as Harry Potter Is Initiated Into Adulthood (July 19, 2007)

Hiroko Masuike for The New York Times
Young followers in New York.
The Harry Potter phenomenon reached its tumultuous climax this morning as “Harry Potter and the Deathly Hallows,” the seventh and final installment in the hugely popular series by J. K. Rowling went on sale at 12:01 a.m.

Parties to herald the arrival proliferated around the city and across the country. At the Barnes & Noble in Union Square in Manhattan, lines snaked around the block as police officers ordered fans off the street. Downtown in SoHo at the McNally Robinson Bookstore, an adults-only group swilled “magic punch.” And at the Borders at Time Warner Center in Columbus Circle, fans who had been given numbered wristbands earlier in the day thronged around the front of the store at midnight. “Are we ready for Harry Potter?” yelled the manager. “Yea!” the crowd screamed back.

Pilyoung Yoo, 41, won a raffle for the first place in line. “It’s so amazing,” she said. After snagging their copy, her son Ted Yoo, 9, opened it to page 705. He wanted to find out how it ends.

In London, where the book went on sale five hours before New Yorkers could get their hands on a copy, Tineke Dijkstra, a 15-year-old fan from the Netherlands, had waited in line outside the Waterstone’s in Piccadilly Circus for two days to ensure that she was one of the first ones to buy the book. “I slept three hours in the last two days in the rain,” she said after emerging from the store with her copy. “I’m going to go and read one chapter and then go to sleep.”

Throughout the day in New York and elsewhere, booksellers readied for their biggest party of the year by putting the finishing touches on cauldrons, replicas of series locales like Diagon Alley, and Potter-themed snacks and drinks like “golden snitch” balls and butterbeer.

It was a day when fans lined up for hours, dressed up as their favorite characters, and braced for all-night reading sessions of the final volume in the series that has chronicled the magical adventures of the boy wizard, his education at the Hogwarts School of Witchcraft and Wizardry and his epic battles against the evil Lord Voldemort.

In London, nearly 500 fans wrapped around several city blocks by 8 p.m., waiting to get into Waterstone’s, many eating pizza and chanting, “Good will prevail!” By 11:30, the mob had worked into a pandemonium of excitement, shouting, “Only half an hour to go!” and singing, “J.K., J.K., thank you!” The street outside the store was so clogged with revelers that cars and buses could only pass through one lane.

In SoHo in Manhattan, Chelsea Logan, 17, and Leah Wickman, 18, two recent high school graduates from Santa Rosa, Calif., arrived at 7:30 a.m. yesterday to sit on the corner of Prince and Mercer Streets, up the block from the headquarters of Scholastic, the United States publisher of the series, to mark their places as first in line to buy their copies of “Deathly Hallows.”

“We were terrified that we were going to get here and there would be, like, this line,” said Ms. Wickman, sporting a T-shirt with the crest of Gryffindor, the Hogwarts house where Harry and his closest friends have lived for most of the series.

Two years after the sixth book in the series, “Harry Potter and the Half-Blood Prince,” set sales records, the publishers were expecting “Deathly Hallows” to do it again. Scholastic, the United States publisher (Bloomsbury publishes it in Britain), has printed 12 million copies, and Barnes & Noble and Borders each had pre-orders of 1.5 million copies; on Amazon.com, nearly 2.3 million copies had been ordered worldwide.

Over the decade since the first book, “Harry Potter and the Sorcerer’s Stone,” appeared in Britain (as “Harry Potter and the Philosopher’s Stone”), the series has become a publishing sensation. More than 325 million copies have sold around the world, spawning movies, collectible figurines, souvenir candies and most of all, a passionate fan base that is about to conclude what for many of them has been the greatest reading experience of their lives.

“I am quite bereft at the fact that it’s over,” said Lauren Calihman as she waited for a wristband that would give her a priority place in line at the Barnes & Noble in Union Square in Manhattan. “I began reading when I was in fifth grade, and now I’m a sophomore in college, so it’s been a lifelong friendship.”

Ms. Calihman, 19, was decked out in Potter regalia, with owlish glasses and her version of a Hogwarts uniform: a button-down shirt, gray sweater dress and necktie. During a week in which spoilers leaked across the Internet, photos of the entire book appeared on file-sharing sites, and some newspapers, including The New York Times, published early reviews, Ms. Calihman studiously avoided any blogs or news reports that featured spoilers about the book. “I cover my ears when people talk about it,” she said.

But down at “Harry Potter Place,” a cobblestone stretch of Mercer Street in SoHo that Scholastic had turned into a street fair with jugglers, face painting and a huge model of the Whomping Willow, Renesandy Diaz, 15, confessed that he had read the ending of “Deathly Hallows” online earlier this week and learned who died. “I was upset, because I know how hard J. K. Rowling’s worked and it’s disappointing to see pirates put the book online,” he said. He still planned to buy a copy and read it through “until I drop.”

The “Harry Potter” books have not only transported a generation of children, but charmed adults, too, who got into the spirit of the Friday-night parties. In Peninsula, Ohio, where the entire town had transformed itself into a Potter-themed village, Stacy Sadar, 39, an executive recruiter from Richfield, Ohio, dressed up as Lord Voldemort and brought her horse, Moonshine, costumed as Voldemort’s snake sidekick, the Basilisk.

So what did Ms. Sadar think would happen to her character in “Deathly Hallows?” “Oh, I’m going to die,” she said. “I’m not even going to live through the night. I’m very upset about that.”

On the West Coast of the United States, the Pacific time zone was working against readers who wanted to remain in the dark on the plot (“Deathly Hallows” went on sale there three hours after its debut in New York). At Cover to Cover, an independent bookstore in San Francisco, Mark Ezarik, the owner, said most fans were trying to figure out how to avoid spoilers. “Fans are trying to stay away from the Internet,” he said. “They don’t even want to talk to anyone. Everyone is terrified about learning what happens even before they have the book.”

For booksellers, the new “Harry Potter” is clearly the biggest release of the year. But because of major discounting, many will not make a huge profit on the book. But while margins on “Harry Potter” are thin, “it brings a whole lot of people into the store,” said George L. Jones, the chief executive of Borders Group, as staff members at the chain’s Time Warner Center store prepared for its huge shindig. “It entices them to buy something else.”

With the series drawing to its much-heralded close, it was clear that future generations will come to the books without the hoopla that has defined them since 2000, when the publishers first set a midnight release for the fourth installment, “Harry Potter and the Goblet of Fire.”

“I think there is something that is extremely special about having lived through the first wave,” said Arthur A. Levine, the Scholastic editor who first bought the United States rights to “Sorcerer’s Stone” in 1997 for $105,000. “But when I read Jane Austen for the first time, I didn’t feel like ‘Darn, I wish I’d been there when Jane was out there letting them go for the first time.’ ” At the end of the day, he said, a reader’s “experience is a special, one-on-one intimate experience whenever you have it.”

Wow, that was along read, thanks for posting!

Have a nice break Brit and PG, don't stay awy too long!

Hey Victor aka The Mustasche, you are not aging very well

Have a nice vacation girls!!!

And long life to JW and the mustache!!:))

I already finished the Deathly Hallows yesterday, it was depressing to say the least since there are no more books for me to look forward to. Haha yay for Tom Selleck's mustache and I swear I saw a man with a ridiculous-looking mustache like the one of Mr. #4 walk past me once before and I had to do a double-take on his 'stache.

In this case I have to take average movie goer side - I would too choose crappy Sandler movie over HP boredom. Stupid gay jokes are still more entertaining!

I'm right in the middle of Hallows now, no spoilers I promise!

PG & Brit: Have a great hiatus/vacation!

PS: Victor Newman is still on the Young and the Restless??

Took me eight and a half hours but I finished in in one sitting (minus bathroom breaks!). Now I'm reading it again because I know I missed stuff the first time around - I was so excited/nervous to find out what happened. Very sad that it's over.

3:56PM: I hope you join the discussion in the forum!