Jake Gyllenhaal arrived back in Los Angeles earlier this week after a mistaken trip to Idaho for some early campaigning. "I'm sorry; I know now I should have gone to Iowa," Jake exclusively tells Jake Watch. "I was pretty sure it wasn't Illinois or Indiana, but who knew there were so many damned 'I' states?" Gyllenhaal's mistake does not seem to be an issue, however, as the latest Jake Watch poll has 14% of eligible voters saying they want Jake to be their President "a lot," another 32% going with "a hell of a lot," and the remaining 54% answering, "I'm registering as my dead grandma so I can vote twice." 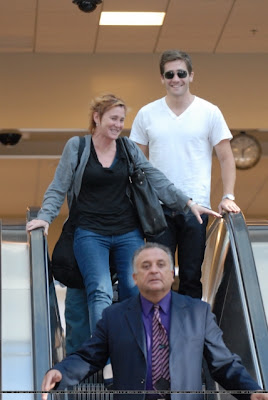 Jake laughs off his mistake in the Boise airport with an unauthorized female his manager and a humorless man in a purple shirt.
Victory over the polling numbers was short-lived, however, as the first smear campaign of the season reared its ugly head from the Stewart/Colbert camp, a campaign whose MySpace page pretty much sucks because it doesn't even have a banner at the top (although they do have a depressingly higher number of friends than Jake in '08). Stephen Colbert released the following statement last night, "I see Jake Gyllenhaal has been wasting jet fuel again. Lazy bum. Like he couldn't bicycle to Idaho? Jake Gyllenhaal's carbon footprint is so big, they had to baptize it at Sea World. It's so big, it's got its own zip code! When God said, 'Let there be light,' he asked Jake Gyllenhaal's carbon footprint to move its fat ass out of the way!"

Camp Gyllenhaal has confirmed that Jake's ecological impact is roughly 3.5 times that of the average American but points out he's The Gyllenhaal and it takes a lot of airplane rides to accomplish as much as he has at such a young age. Gyllenhaal himself said, "Even if I drive my car somewhere so I can ride my bike, at least I'm in better shape than most people in this country!" The Stewart/Colbert Team has declined our repeated requests for their BMI ratios. Jake Watch is predicting that this is going to be an exciting race.

Picture from the Jake in '08 photo archive.
Posted by Becky Heineke at 1:51 PM

I'm so glad you went ahead and did this post, because it rocks, PG! I just have to quibble, though...that woman is, or at least should be, highly authorized, as she has been identified as either his agent or manager (that is, if you believe these highly dedicated fans, and I do :))

I must say, I am rather embarrassed that I was unaware of the Stewert/Colbert campaign until you pointed it out to me. I wasn't planning on getting a MySpace just to friend Jake in '08, because I didn't do it to friend a real life friend...but now there are 3 reasons and it's getting rather compelling. Would I be exiled from JW if I friended both campaigns? I mean, I love Jake, don't get me wrong, but I'd rather not see him turn into an actual politician. On the other hand, Jon Stewart is perfect for the job and I have no reservations whatever about electing him to represent me to the rest of the world. Such dilemmas....

(sigh!) I always imagined Jake's "carbon footprint" would be really big. Now it's been confirmed, am SO voting for him. I look forward to being smothered by Jake.And Jon Stewart and Stephen Colbert, eat your hearts out!!! As far as BMI goes, Jake is ALL muscle!

Wow, amazing poll figures guys. And those were for 'all eligible voters', huh? That's a pretty impressive election machine going on. You polled like,everyone?

Personally I'm hoping to sneak into the USA and register a dead person to vote so I can vote Jake in '08 even tho' I'm not American.I was thinking Marilyn (Monroe that is not Manson- I don't think he is dead- just looks it.)

Edit- I typed this comment and then when I previewed it the comment above was already there. Weird.

P.S.
And I'd be more than happy to sing for Jake on his birthday.

Well counselor, I think this is just proof of Jake's appeal. It crosses all demographics. Apparently we won't have to force or otherwise fabricate the votes of dead grandmothers! I'm very impressed that PG and BPB have gotten the word out so effectively.
I am interested in what kind of questions you all asked in your survey of likely voters. I am wondering, specifically how many of your voters bathe. If it is a significant number we can fashion a custom made campaign commercial with Jake taking a shower....maybe just one of those clips from Jarhead...you decide which clip...

You're always at your best when it comes to talk about Jake and politcs! :))

Joycedavenport wrote : "Personally I'm hoping to sneak into the USA and register a dead person to vote so I can vote Jake in '08 even tho' I'm not American".

Aw, man! That's his agent or manager?! I just showed my true Gyllenhaalic colors, didn't I? :D Well, she's not employed by the Jake in '08 campaign so I still consider her unauthorized.

And I have it on good authority (ahem) that Jake in '08 has requested the friendship of the Stewart/Colbert ticket, so I think you would be forgiven if you befriended them, Cherita. ;)

As for the polling numbers, it's all just preliminary at this point. I foresee many, many more polls in our future...

Aw, man! That's his agent or manager?! I just showed my true Gyllenhaalic colors, didn't I? :D Well, she's not employed by the Jake in '08 campaign so I still consider her unauthorized.

I wouldn't worry about anyone here thinking less of you. Hell, I only saw it because I was scouring their board for info on where he'd possibly been this time...because these things matter, damn it. But as far as her not being employed by the campaign yet, well, that sounds like a recruitment opportunity to me! After all, she seems like a hip chick. She's dancing on an escalator!

LMAO!! What a great post, Jake and Stewart/Colbert, I love it!!

I think you should add his manager/agent to his campaign team, I mean she is dancing on the escalator!!!

Wouldn't you dance on escalators if you were Jake's manager? Paid to look after Jake and his needs. Is there a better job on the planet? Give me a choice between that and President of the whole world and it would still be a no brainer as to which I would choose.

LOL!! Jake friended Danny Bonaduce on his campaign Myspace! I hope an endorsement is coming!

Ouch! The snarky carbon footprint comment totally hurt Camp Gyllenhaal. How to make up for the mental image of Jake messing with Creation/Day 1? We need to give voters the full story:
On the 7th Day, after God rested, He realized that His Creation was imperfect. The humans especially were seriously flawed. So He made a special Sunday Project aiming to create the Prefect Human Being. And God said: “Let there be Jake Gyllenhaal”. Jake opened his dreamy baby blues, batted his long eyelashes, smiled and said: “Hi God, what’s up? Nice beard!” And God said: “Oooh, perfect! But wait! You can’t just walk in the World like this! I have to give you some shortcomings so that you may be mistaken for a human. Any suggestions?” Jake: “Hmm, I don’t really care about fashion...Also, I would like to travel a lot...” God: “Great! Let’s see: a) questionable taste in clothing/shoes and b) seriously big carbon footprint. You’re ready to go!” Jake: “Thanks God. Now, can I time-travel back to Day 1 to start testing that carbon footprint?”

Jesus Christ. I made the mistake of logging onto this blog this morning while I was drinking coffee, and now I have to clean up the mess on my desk, keyboard and monitor.

I don't know PG...I think you and BPB are getting so sharp in your writing we'll have to be careful not to cut ourselves reading! Absolutely brilliant post!!

And Pink Mist - ROFLMAO!!! You're not too shabby yourself.

Thanks so much for the entertainment. You guys totally rock!!

I second that girls, thanks for the laughs!!

Does it upset people in the UK when Americans celebrate the 4th of July? I mean, it's when we got divorced!

What a great post PG! I'm all for Gyllenhaal in '08, I can't wait untilhe reveals his running mate!

Actually Matthew would be an ideal propsect!!! He seldom if ever wears a shirt.Hopefully Matthew's "fashion sense" might influence Jake...in a good way. And Matthew is SUCH a free spirit. He'd have the whole world doing yoga on the beach, playing bongos and ingesting the aroma of mysterious herbs !!!! Can't you just picture Jake, with a beard, in his swimming trunks, bobbing his head to the rhythm of Matty's bongo beat,insisting Kim Il Jong sing the words to My Umbrella to his South Korean counterpart? Why, they could have an entire G8 cofnerence in Malibu and just redefine the whole thing. Think about it.

I would like to welcome Mr. Gyllenhaal ( I assume he will be running as a Democrat)and his campaign with open arms. We are all looking forward to his platform and his ability to whip up a frenzy with the young voters. Just one thing though: Jacob, please take care of the missing Boo problem. There was some chatter that Boo may be secretly a Republican. Rumors abound that Karl Rove has been seen walking a puggle around Washington. If true,you will need to make a statement ASAP, we don't wan't it to effect his campaign in '08.

According to you polling results nobbody doesn't like Jake! If Jake maintains this kind of support through out the campaign,I think we should like, just not have an election. They are SO expensive, and we could just make Jake the President. Can we do that??? It makes the most sense. And does he need one running mate? Because we could like, take turns.

I think a while back there was some sort of general consensus that Robert Downey, Jr. should be Jake's running mate, although I have to say that from what I've been hearing from the top, no clear decision has been made yet.

As for the polls...well, you'll notice the word "all" was never used, so it's possible our results were biased...and of course they were compiled prior to the aforementioned campaign scandal, so... With 16 months to go, there could be some ups and downs. All to be reported here (of course!).

I'd vote for Jake in any type of erection no matter which caucus and for any campaign he'd be mounting with any running mate.

Do you have copy writer for so good articles? If so please give me contacts, because this really rocks! :)

I would appreciate more visual materials, to make your blog more attractive, but your writing style really compensates it. But there is always place for improvement