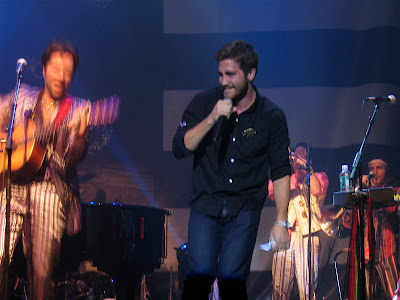 No, he didn't. The headline was a total lie, but it did grab your attention, did it not? That is the purpose of headlines.

To the surprise of none, Jake has shown up in New York after his lollipop-laden departure from LAX earlier this week. But to the surprise of many, it appears Jake was not in town to visit with his various family members and friends who sometimes live there, but rather to jump-start his singing career. Yes, heading down the well-traveled path carved by Lindsay Lohan, Paris Hilton, and Eddie Murphy before him, Jake is jumping the acting boat so that he may swim to the shores of a career of pop music. This news should come as a surprise only to those of you who believe what you read on Jake Watch.

Jake read the spoken-word portion of the song "Between My Legs" (scandalous!) at a Rufus Wainwright concert last night, surprising the rightfully delighted crowd. Roughly 24 hours later, I stole the above picture from poster "agnusday" on a Rufus Wainwright message board and then made up a fake headline. Thank you, agnus. Please don't sue.

Major props to get real, who essentially did this post for me. :)
Posted by Becky Heineke at 12:52 AM

Mom, this isn't right. I was supposed to be there.

Thanks for the shout out, PG! Glad to be of assistance. ;)

It helps that I just happened to be looking at PITB and saw the pic, lol. Damn, I wish I could have been there to see Jake in all his glory with Rufus.

Btw, for some reason the link you put up for the Rufus message board isn't working. The one I posted in the last thread still does though.

Maybe Jake is audtioning for a play, he did do the spoken word part of the song and he said that he is looking to do a play in NY. Anyway it looks like he had a blast and I'm glad he is in NY but i think he is mainly hanging in Brooklyn.

I just think it's so cool that he got to do that with one of his favorite singers!

OK, I think the second link is working now but let me know if it stops again. That's actually the second time I've fixed it. Weird!

I would have just keeled over and died if I had been at that concert! Holy crap!!

Maggie was at the show a couple of days earlier. Rufus,has different friends, or celebs, and etc., do that spoken word part when he performs this song in the show. From reading the thread, someone said they were going to try to get something posted for YouTube, but I don't think it's up yet. I think it is SO totally cool that JW is on it with this kind of shit. And Jake looks like he is having a ball! Now that everyone knows he is in NYC, bet he heads back to LA in a few days...or not. LOL!!!

NC Woman, i agree.. can u imagine when they announced he was coming on stage?! I probably wouldnt have even saw him, and been trampled by the crowds cause i would have been passed out on the floor even before he came out.

Oh and, ive never heard of this guy... shame on me i guess. What lyrics exactly did Jake sing? Anyone know?

I think if you go over to the Eyelashes thread on the DC Forum, they are posted on page 20 ----- Aw heck, here you go (they look better over there I think):

You can go out, dancing
And I'll write about you, dancing without you
And I'll shed a tear between my legs

When you were here, I missed you
Now that you're away, I'm out there without you
And I shed a tear between my legs

Though we live in the same city,
You live in another state far away from me and all of my unfaded charms
But when the rocket ships all fall, and the bridges, they all buckle
And everybody's packing up their station wagons
There's a number you can call, like a breast that you can suckle
And we quietly will exit as it all is happening

Again, I'm afraid of one thing,
Will I walk away from love knowing nothing, wearing my heart between my legs?
But when I know you're naked, lying on the bed while I'm at the piano
All I can say is I can't fake it

I shed a tear between my legs? Impressive.

wow thanks Jane! I agree with Britpop.., impressive!

I actually have no idea what you're talking 'bout, 'cause I've just watched "Making the movie" on VH1, so I'm dead. He and all the leading acrors were speaking out 'bout the Zodiac. He said "The director was actually PAINTING people" and complained of his obsession of being as real as possible. In the end Jake said "This movie will F*cking blow you" with the sexiest undue familiarity he is capable of. His hair was fine and the face was like OH MY GOD!
Don't know about the review, but you should see it.

I don't think they announce the person on stage. I think with Rufus, the person just show up and recites," Cause there's a river running underground, etc...."

My bus on the way to work passed the theater Rufus is playing at in NY and it said that it was sold out. I said to myself, shit I would love to see him live.

Seriously, I would have fucking passed out if I was there on Friday, looks like he had a great time!

BTW: Tonight Broadway is totally lit up for the Tony Awards. This is THE major theatrical awars show in the USA. I wonder if Jake will be presenting? Or Maggie? Bcz if she is, with Peter in Vancouver working, Jake would probably go with her. And if Jake is really getting ready to announce some theatre role, he would likely be there to present. The tonys will be televised in the states so I'm wondering if Jake will be there.

2:42PM: Jake is not scheduled present and there is no reason for him to nor Maggie for that matter. I do hope Jake really was serious about doing a play in NY and he I think it would be great!

I remember when Jake was on Letterman and he was raving about "Spring Awakening" the play he'd seen. And now there are predictions that it will "sweep" the Tonys.

3:12PM: I thought he talked about Spring Awakening on TRL not Letterman? Anyway it's predicted to win best musical along with a slew of others.

Oh and, ive never heard of this guy... shame on me i guess.

No, you have and you just didn't know it. :) He's known to us Jake people as the guy who sings "King of the Road" and "The Maker Makes" on the BBM soundtrack. ;)

When Jake G. came out during "Between My Legs", it was just the best surprise! They even pinned a friggin' broach on him, too! :o) And he hammed it up immensely. The best part was Rufus' reaction while Jake was up there - I think he almost lost it himself, he was laughing so hard! I'm sure that Jake will pop up on YouTube, but I hope that someone also captured Rufus, as his reaction was priceless

I hope this shows up on you tube!

Jake, do some Shakespeare in the park or something. Please ... please ...

I just realized. Jake is the same degree of hairiness now as he was last year at this time. Except his hair is a teensy bit shorter, but not that much. Facial hair the same. Why should I even care about such a thing.

Never mind Jake singing, if we can all club together and make $20,000 we can rent the Gyllenhaal residence for a month! (but it doesn't say if Jake's included in the price)

Pictures at Iheartjake, and I gotta say I heart that house.

Jake, we need to go shopping. You need to buy some new T-shirts. We all know that the postage stamp one has practically dissolved. But borrowing you dad’s shirt to wear in concerts is not an acceptable alternative. With that outfit and the beard, you look like your uncle Jim (or you would if you had an uncle Jim). Still hotter than anybody else on the planet, but you know what I mean ;-)

I didn't know (or, as PG said, I knew without knowing) who this Rufus Wainwright was too, but it must have been a quite "exciting" experience listening Jake reciting the words of that song...

Any truth to the rumor that JW is renting the Gyllenhouse??? It looks rather like one of those executive retreats. But it could provide a great training ground for agents.

Well, thanks for ruining our next post, you guys.

Seriously. You're like frickin' mind readers. We've had it planned since Friday. :(

I can hardly wait to read it!!

PS I just did a calc and it would cost $222.22 per night per bedroom, if every bedroom was occupied every single night.