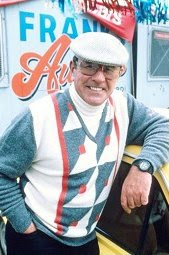 What’s up, me mockers? Frankie here. As Air Gunner’s manager, I’m responsible for all aspects of his career. Now I know there’s been some right Auntie’s Bloomers knocking round ‘bout the lad. What can I say? Comes with the territory. Last I heard they was all banging on about some twist ‘n’ twirl called Reese. Well, I wrote Air Gunner an British Rail, asking ‘im what all the commotion was about. Look, guv’nor, I said, there’s only so many ways we can play this game of gin rummy. I say we call River Nile. I don’t want my star buck running a’ muck with some divorce horse, especially since my Jesse Metcalfe is on the blink.

Hope that makes everything crystal. Now, if you’ll excuse me, I need to go for a gypsy.

Posted by britpopbaby at 7:19 PM

It's all in cockney rhyming slang!! I love it. I can do some some:

and crystal is short for 'crystal clear'.

LMAO!!!! This is wonderful!!! I feel like I'm somewhere in London in a dark beery pub or something!!!! Wait. Let me go get a Guinness!!! (Too early for gin.) Frankie has such a air of the primitif about him, n'est pas?But if Frankie doesn't want Jeese, and Frankie doesn't like Gyllenstrong, or the Zen of Matty, what's the poor thing to do?????

I need to work out Air Gunner. I guess it means Jake but the connection needs research.

Darling are you still alive!

Yes, Frank and Pat 4-ever! They were my favorite Eastenders couple. When Eastenders first started airing in the states we were several years behind and then BBC-America started airing curent episodes and then I became confused and lost track of the show.

PS: Tell Frankie to get in touch with Natalie, I hear she's off again with Gael!

I think Jake (Air Gunner=Air Nikes?) has issued a formal statement denying any boot knocking with the lovely soon to be divorced southern belle, Reese through his manager, Frankie. I suspect Gunner is fibbing just so Frankie will stop nagging him to go after after a twist-n-twirl w/o the baggage. I'm available BTW.

Nattie's b'day is this weekend! Maybe Frankie can set the two charmers up????

Air Gunner= U.S. Military/Machine Gun. Don't know how that translate in Eastspeak, i'm sure it means something entirely different.

Well it's now crystal how Jake has made such wonderful career choices with a Svengali like Frank behind him whispering in his ear. Er, that didn't come out quite right -but you know what I mean (which is more than the rest of us can say about Frankie speak!)

Thanks Frankie, for making that CRYSTAL for us ;)

Wonder how Frankie would respond to the fact that that Armstrong guy hangs around the hot clubs scene in H'wood, picking up random blondes...a LOT???

jake is in nyc! He was spotted at Rufus Wainright's concert according to pink is the new blog.

The most amazing thing happened last night at the Rufus Wainwright concert at the Blender theater at Gramercy Hall in NYC ... Rufus has a song called "Between My Legs" (awesome song, by the way), during which - near the end - there's a spoken word part that sounds very Smiths-esque on the CD. Well, to read it live last night at the end of the song ... Jake Freaking Gylenhall comes out (looking hotter than hell!) and does it live. It was amazing and the place was freaking out!!!

Yay, he's in NY!! Jake is a fan of Rufus, has been for years. On IHJ in the FAQ section they have a list of Jake's favorite singers/groups or what's on his ipod, anyway it's not new I think it's from '04 and amongst U2, Springsteen, Maroon 5 and Kayne West is Rufus! And he wrote king of the Road for BBM.

I was at a Rufus concert and Joeseph Gordon Levitt appeared on stage with Rufus, too bad I missed Jake!

how did self avowed gyllenhaalic, trent from pitnb manage to mispell jake surname twice??
standards are slipping agents!!!
this matter cannot be ignored.

Yes, Jake in NYC and at a Rufus concert!!!! Here is the picture from PITNBand one from aRufus Wainright message board. Jake looks AMAZING!! And I love him with Rufus. :)

^^ Sorry for the spacing issues above.