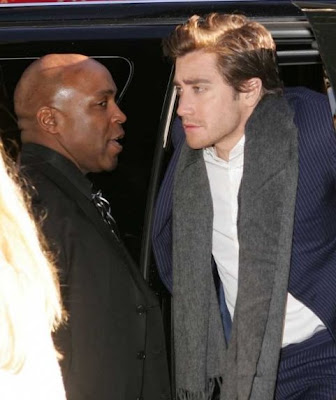 awrighty now! That is your job Number Six, not ours!! Jeez!!

Dude. It's a time-honored Jake Watch tradition, known by many names over the months, even though most people choose not to participate and instead discuss the picture in question. I think I'm not technically qualified to go for this, though...resulting in an off-topic comment. Oops.

Wish you looked this good bitch?

Dude - get your arse back in that car and git to Blighty for a Zodiac prem PRONTO - comprendez?

hmm, this is a tough one to caption. i’ll take a stab:

security guy: jake, don’t look now, but i think marrakesh is lurking behind those cars. he may be up to something.

jake: (in the zone) sigh, can’t u just take care of it? don’t u realize how much concentration it takes to maintain this bored but sexy look that made my gq-cover so well received? if i recall correctly, this look also got me my oscar nomination when i used it in that famous scene where i look like i’m gazing longingly at heath. who cares if it was just an instance of dry eyes? the girls/guys love it.

ok, that was too long =P

Jake "hang on mate, i cant get out yet.. these undies are giving me major wedgies, i should have bought those Pro Breifs i looked at the other day dammit"

Jake: How many of them are there?
Security: Six. We sent them up to your room.

Guy on the left: "that girl over there claims to be your wife"

Jake: Just let the ladies through! I'm in the mood :)

Jake: Dude, no offense but I specifically requested a 5'8" red-headed female bodyguard who can watch my back!

Guard: Word on the street says you were...
Jake (interrupting): Do I have sad eyes?
Guard: Huh?

Jake: "No, no, no, you are doing it all wrong, dude. Stick your tongue out just a little and, please, keep your mouth close. There, then watch the girls faint"

off topic but URGENT question to my fellow german gyllenhaalics:

is it true that they DELAYED the zodiac release till may 31st?!?!?

imdb.com still says april 12th but for example www.filmstarts.de says it opens on may 31st. so which date is right?

i was very very p***ed when i read that this morning.

"off topic but URGENT question to my fellow german gyllenhaalics:

is it true that they DELAYED the zodiac release till may 31st?!?!?"

Its true, I just checked kino.de and cinema.de, they both have the new release date may, 31....no words...

Bloke - OK, keep your scarf on!! We know how much you hate the cold so I've delayed Zodiac's European release date till the end of May. So it'll be lovely and warm when you go to the premier.

JG - You mean Britpopbaby and Number Six might actually get to wear the bikinis I sent them?

JG gazes into middle distance for slightly too long...

In the time honoured tradition of being unable to make up my mind, I submit two.

Jake’s brow furrowed as he was told they had the cravat to go with his scarf ensemble, but the pipe had unfortunately been left in Morocco.

Guy: "They’ve requested a wackier picture for the next caption competition."
Jake [with a far off look in his eyes]: "Why is a sparkly top hat never enough for those crazy bitches!?!"

Jake: Hey! Did anyone ever tell you that you look just like Barry Bonds???

Security Dude: Hush! I took a break from Spring Training to help you out and NO!! I don't take steroids!

security guy- erm, can you change a tyre?

Jake:"Dammit - check back with me in 10 minutes I need to buy some undies"

Security Guard: I should tell you there are several people here already. . . . some girl who claims whe's a prophet, a rather tall rabbit, and a big quiet guy with a knife.

Man on left: "Sir, I'm Detective Smith from the Fashion Police, I'm afraid I'm going to have to arrest you under the Incredibly Bad Co-ordinated Accessories Regulations"

Bodyguard: Kristen's in there talking to Reese.