I KNOW WHO I'M BEING NEXT HALLOWEEN

No, not Jake Gyllenhaal. FRANK!

As modelled by Gnarls Barkley: 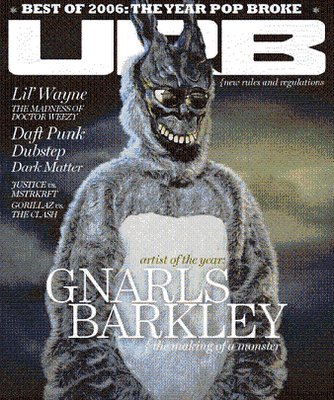 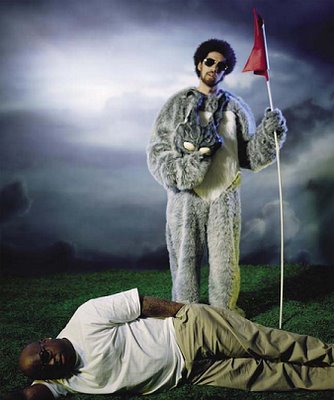 Buy your own suprisingly expensive Frank The Rabbit costume HERE.
Posted by Jake at 4:45 PM

The only way I am paying 200 dollars for a Frank costume is if it comes with Jake inside!

Frank's voice was so sexy in a creepy way when talking to Donnie... that costume rocks!

This is slightly OT, but not. In the movie Independence Day,
(starring Will Smith and Jeff Goldblum) the guy who played Frank, the Rabbit in DD played the son of Randy Quaid who played Aguirre in BBM. I know. Sorry.

I think the new agents should be required to wear the costume. They'll scare the crap out of unauthorized individuals and thwart any thoughts of kidnapping.

and they should stalk jake in those costumes. and the paps should catch that. that way, we would be able to cross that one out from the paps bingo! :D

^^ wow, i think it would be just a tad creepy/stalkerish if someone did that to jake. that costume freaks me the heck out. and DD is my favorite jake movie.

have you guys seen the special feature from the director's cut dvd of DD on the rabid devotion of DD fans? there was that #1 fan who was kind of stalking the actor who played frank, and was just extremely obsessed, to the point of kissing richard kelly, the director. i wonder if jake would be freaked out... heh, as much as the idea scares me, a huge part of me does want to cross out that square from pap bingo. so conflicted =P

^^ Yes that guy was insane!!! He would be LOVING the costume!

Testing to see if my avatar is showing now...

when the comments page is loading there's a window saying that it contains dangerous elements... urgh

Secure internet connection, https? It getting like Fort Knox here. Why are the security?

Yeah, what's happening - why no avatars?

(Oh, and if someone showed up in my dark yard wearing that Frank the Bunny costume, it would scare the ____ right out of me!)

Hey is that for real? I mean Gnarl Barkley in the Frank costume? How cool! Remember Jake went to watch them in Austin? I guess the admiration is reciprocal ... at least for their work.

Sorry but should there be a top banner on the main page? And what should I be seing on it? Because I just get a line with blogger shit and one with links for the JW page
...

Gnarles Barkley is made of awesome!

I know Jake probably giggled when he saw it. Thanks for making those connectiosn anon 4:25! :o)

And we thought this would be the hardest square to fill in papparazzi bingo.

Oh shit I remember Jake and Lance at the Barkley concert in September at the ACL Music festival, cool!!!

I remember Jake and Lance at the Barkley concert back in September at the ACL music festival, how cool!!

Hello,
i made the costume for the photoshoot of URB magazine. you can purchase a copy of the costume at www.kreationx.com

I apologise, but, in my opinion, you are not right. I suggest it to discuss. Write to me in PM.