IT KEEPS ON GETTING BETTER 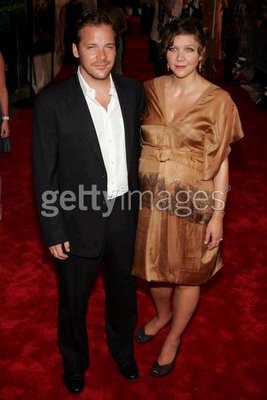 I was going to talk about how gorgeous Maggie looks again and how unfair it is that the Gyllengaard gets to be covered in the kind of designer material I can only dream about but then I got distracted by Le Sex and then...er...erm...lost...all...abiltiy...to...think...

OFF TOPIC: Can someone explain to me what the 'London Bridge' in Fergie of Pea fame's latest single er, 'London Bridge' means? I guess it's something pathetically sexual but I can't think what. I'm too innocent. And FYI, Fergie of Pea, that's Tower Bridge you're gyrating your surgically modified ass up against, dumb moose. If you want to fornicate in front of The London Bridge, it's in Arizona.
Posted by britpopbaby at 1:56 PM

WTF?? I have no idea what you are talking about Brits. I must be getting old!

I thought you were all about the popular music, NRM!

yeah, i know it's sexual, but i'm too innocent as well haha. or maybe i'm too dumb to relate a falling metal bridge to any part of the female body... i dunno. i liked it better when fergie used obvious terms like lady lumps haha.

great pics-- hmm, anyone know if maggie is only sticking to nyc premieres because she's too far along to fly to la? darn, if that means if jake's too lazy to fly to ny to support his sister, we won't be seeing him in decked out premiere pics anytime soon :(

Oh shit, oh shit, oh shit
When I come to the clubs, step aside
Pop the seeds, don't be hating me in the line
V.I.P because you know I gotta shine
I'm Fergie Ferg
Give me love you long time

All my girls get down on the floor
Back to back drop it down real low
I'm such a lady but I'm dancing like a ho
Because you know what, I don't give a f***
So here we go!

The Grey Goose got the girl feeling loose
Now I wishing that I didn't wear these shoes
It's like everytime I get up on the dude
Papparazzi put my business in the news
And I'm gonna get up out my face (oh, shit)
Before I turn around and spray your ass with mace (oh, shit)
My lips make you want to have a taste (oh, shit)
You got that? I got the bass

That song has been baffling me for weeks. I didn't have the guts to ask what the hell she was talking about though. I feel better now that we're all apparently too innocent to understand. I haven't seen the video or else I would comment...but I'm sure it's super dumb. And yeah, lots of people think any bridge in London is "London Bridge." I'm embarrassed on behalf of my country.

Yeah right. Brit it's in Arizona yes, but why? Didn't England want it?
Would France sell the Eiffel tower and watch it move to New Jersey? (I think Not!)
Would Egypt sell the great Pyramids of Giza?
It's a historic bridge! one of children's song fame here.
Do you know that the children's song dates back to the Bubonic plague?
I think it should be returned. really.
It's not a mere Disney attraction!

"ashes ashes all fall down" is a reference to all those dying from the plague.

The traffic going over it became too much and peeps thought it might collaspe. They could strengthen or reinforce it so they dismantled it to build a new (dull and ugly) one.

I'm not sure why they sold it to somewhere abroad, money I guess.

'London Bridge is Falling Down' is actually about the bridge collasping for various reasons. It dates back to the 1600's. The pubonic plague nursey rhyme is 'Ring a ring a roses'.

That should read they COULDN'T reinforce it.

Oh your right!...wrong song! LOL my bad!
Now I will shut my mouth for the rest of the day I promise!
My childhood was all screwed up! (embarrassment)

Anneka! Go and answer your bloody email instead of deciphering Fergie lyrics!

STOP YELLING AT ME! I'M FRAGILE!

Funny how mistakes are repeated. Arizona wanted Tower Bridge but thought it was called London Bridge (so bought the wrong bridge). Now Fergie is perpetuating the error by likening her - er, whatever - to Tower Bridge's propensity to open and close, but calling it London Bridge. The present London Bridge is big, solid and doesn't move for anyone.

Does Fergie sing this song?
Miss Bearded Lady needs a shower after reading such lyrics.
What is happening with her?
Don't the diet promotions take care of her financial needs?
I think this is a clear sign that the Queen needs to intervene.

I don't know about all this song stuff ... I am too distracted by the hot Sarsy photo (YOUSA!) - it doesn't help that I watched Kinsey last night ... for those who have not seen the film, let's just say you see a lot of Peter.

Yes TBL! Off with her head!

I liked Peter in Kinsey.

Have they released "Kinsey" on Viewmaster Cards yet?
Or am I getting my hopes up prematurely?

I have no idea what you guys are talking about but for the rest; Homer good choice!! :)

"Love was in the air at "Trust the Man" - which seemed fitting for the premiere of a romantic dramedy.
When one of the movie's stars, David Duchovny, strolled with wife Téa Leoni onto the red carpet Monday night at the Chelsea West Cinema, he suddenly grabbed both of her hands and started kissing them before the couple headed off to a quiet dinner to celebrate his 46th birthday.

Meanwhile, in the lobby, Peter Sarsgaard gazed into the baby blues of his very pregnant fiancee, Maggie Gyllenhaal - who co-stars with Duchovny, Billy Crudup and Julianne Moore, wife of Bart Freundlich, the movie's writer-director.

"You," Sarsgaard cooed to his betrothed, "look sooo beautiful."

Moments before, Gyllenhaal was gushing all over Leoni: "We love you! We have such a big crush on you. We'd love to have dinner with you sometime."

How cute is that?"

Cares, she's old, ugly without makeup and digital imaging, and has fat rings around her neck HAH! Take that Fergie and your humps, piss off before I kick you in the London Bridge!

*small voice* I think Jake and Peter have greedily eaten up all my love and there is none left for Maggie. I wanna love her as you all do but whenever I see her alone I'm like "Drat! Why can't she be her brother or her fiance?!"

In other news I'm glad that the nomenclature of "Le Sex" has stuck because seriously on a given day it's really a toss up as to who I'd like to do more, Jake or Peter. It usually depends on my mood actually. Dirty/Kinky=Peter Tender/Sweet=Jake And so shall it be forever and ever amen.

Also brit, Fergie is so irrelevant don't worry your pretty little head about her.

Told everyone in the DC slash community how nice you were in getting me a b-day present (in my size and everything!) and told them to run don't walk to your blog. They'll be duely impressed that I know where all the cool kids hang out. Thanks everybody for the b-day well-wishes!

Amen to that,Squall. Although after hearing about those 'love giving' with Kirsten in the dressing rooms and other dangerous places and seeing how much he's into sports, it kind of leads me to the impression that underneath that tender,soft puppy there's a Hidden Dragon..I guess I'll never know for sure,huh?..*sigh*

Have they released "Kinsey" on Viewmaster Cards yet?

LOL - I was thinking about putting a Sasry screensaver from Kinsey on my work computer, but I don;t think the particular image I have in mind would be work-appropriate. Naughty!

Beskyddaren what happened to your face??

I think you're on to something Ms. D.

Sometimes, in my wild imagination, it's just upside down, Peter is the sweet kind guy and Jake turns into the kinky brooding hypersexual type, ha!

NRM, yes my looks have been suffering lately, I can't log in for some strange reason after the vacation : (

Maggie looks lovely! For your (dubious) viewing and listening pleasure, here is the Fergie vid:
http://www.videocodezone.com/videos/f/fergie/london_bridge-2.html
I was thinking, why would the Duchess or whatever she is be making a music video? :-)

Why does Hollywood continue to snub the real 3D market?
Are Viewmaster cards somehow beneath them?...
It's a medium that has worked for Gumby for years now.

Thanks for letting me in on what Viewmaster is. I didn't want to look all dumb and have to ask. Like the Fergie thing all over again.

I thought the world over knew about Viewmasters!
Do they call them something different in Britian?

They are hand held viewing device. They have round cards with slide pictures on them. The pictures or Photos are 3D...you hold it up to the light and with a lever on the side move to the next pic.

I collect ViewMasters and the reels, they are the coolest things! I have a Knight Rider series of reels, David Hasselhof never looked so good!

Yeah they have been around for many years maybe since the 20's? ,and they are very cool...you can travel the sites of the world, cartoons, movies ,etc in reels. everything bright and clear in 3D! an underrated "toy"

Ok they started in 1939..here's a website and you can see a classic one inthe banner pic.

Beskyddaren dear i'm sure you look fine! Are you awaiting a boob implant?

This is the first time I've had reason to call into question your taste! LOL

The one boobed diver agent is back finally!

I had one 70's vintage, as a kid. But I remember the slides I always liked the world sites
etc.

I'm a Londoner, it is NOT in common use, but 'London Bridge' is a known term.

slang for a girl's panties. if a girl's "london bridge goes down", it would mean she took her panties off.