AH, IT WAS BOUND TO HAPPEN SOONER OR LATER 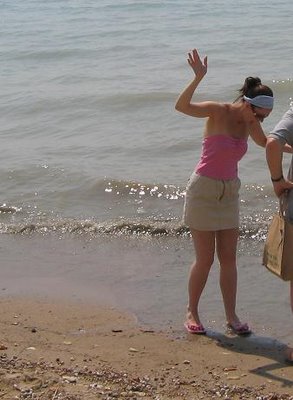 Hahahahaha...THE SWINES!
Posted by britpopbaby at 10:53 AM

Way to go, BPB! You couldn't avoid them forever, you know!!

So can I stick this one on the Bingo Board as "JakeWatch agent"? Or, if that really is Jake standing just in front of you in his grey airmail T-shirt, holding a bag of cupcakes, does that get me three-in-one - JW agent, cupcakes AND unauthorized female??? :-)

You're looking a lit bit Portman-ish there, Brit. But what I like best is the discreetly cropped view of the male companion.

Mmmmm ... dreaming of a beach, around 7:30 AM, just before work begins ... rather than of all the assignments waiting for me today on my laptop.

Damn! I didn't think about that.

I don't think it counts because Jake is not in the picture, that fella there is my assistant.

Jake was actually off buying sorbet when this pciture was taken. I'm sure the whole series will be up soon.

That is NOT a bandana! It's a headscarf thing that is the height of damn fashion.

I'd also like to point out that it looks like my zip is open on my skirt but it's not. You'll have to take my word for it.

LOL. We all knew it would happen sooner or later BPB!

wtbgirl said...
This comment has been removed by a blog administrator.
2:30 PM GMT+1

By the way, there are some SUPER cute phots of Sarsy and Maggie at the WTC premiere last night. Gives her a little kiss in one - so sweet! And once again, puttimg aside my happiness for the pair, which is genuine - Sarsy is a total smoking hot fox - yummmy yum yum.

One disturbing discovery - actor Frank Whaley (Field of Dreams, The Freshman) - who I guess is in the movie as he at in the premiere - looks older than DIRT - what HAPPENED to that guy - he can't be more than in his early 40s?

Anyway the photos are up on wire image.

You read my mind, wtbgirl!

this is a great pap pic, BPB! the cropped out guy could totally be jakey :).

WTB, thanks for the maggie/sarsy pics. so cute! too bad jake's a no-show! he better show up for the LA premiere! oh, and stupid wireimage people mispelled sarsgaard-- dude...

I see you also hide behind sunglasses.
Never let them see you roll your eyes. ;)

the cropped out guy could totally be jakey

Stop saying that! It's my Dad aka my assistant! My Dad in no way, shape or form could ever be mistaken for Jake. I cropped him out because he works for MI6 and can't have his picture on the internet.

Ah- I thought so-like father like daughter- this is all just the family business to you isn't it Bpb?

Wow! Brit. I never realized. You look really glam. I'm really impressed with how "anchored" your top is in that pic!

Does your dad..er..assistant want to join Jake Watch?

Probably not, although he did read the blog today whilst he was supposed to be at work and told me to stop swearing. I believe the quote was,
"We didn't send you to University so you could use words like 'asswipe'!"

I replied,
"Does your boss know he pays you to look at Jake Gyllenhaal blogs?"

Shocking pink anchored tops and dangerously low unbuttoned skirts not withstanding, how does it feel to be hounded by the stalkerazzi?
I see you've perfected the perfunctory wave, and all looks in order. (lets pretend you did not step out in public with so much pink and a blue napkin on your hair: what were you thinking???)

^haha!! I think your dad is on team with Joyce!The Britpopbaby Watch!I think he might get a pass from his boss,giving the "I have to take care of my daughter and her future husband" argument.

Brit?
you weren't getting all violent with the paparazzi here ala Bork.
were you?

P.S. I note how the flip flops coordinate with your top....very smart.

I have same bandana light blue as yours :O)

You are very very pretty i thought the pic was about Natalie Portman !

^Aww, thank you, jhoey. I could create some showbiz reason for my tantrum here but honest fact is I had tried to wash my dusty feet in the Lake only to step in sand and get it all stuck on me. Worse than before I started.

See, don't you wish Jake would explain his pics for you?

Aw, you are totally adorable, Brit!!

I thought it was Natalie Portman too! Very nice pic, BPB, I like your outfit!

"the cropped out guy could totally be jakey"