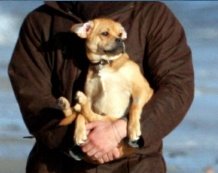 In association with JAKE WATCH, I present to you...
BOO WATCH!
The idea of Boo Watch has been circling around my mind for some years now, okay, two days, and I thought it only proper that the special little dog we've all come to love should recieve his own sub-blog. Unfortunately blogger.com don't provide such a service so he'll just have to share with Jake. Now your interest in Boo (or Boo-ga-loo, as I shall sometimes be referring to him) may not stretch too far but as a two cent pychologist I suggest we look at him as a portal to the inner Jake. Remember that Boo is Jake's child and he has raised him, as a single father, since puppyhood so in Boo, Jake is reflected. Yes, this is all perfectly sane...
(originally posted: 4/11/2006)

Boo Radley is not a free dog.

I can understand that there might be many reasons why the G feels the need to clutch onto Boo like he is the last cupcake in the Sprinkles shop; maybe he doesn't want him to dash under the wheels of a paparazzi van, maybe he doesn't want him kidnapped by a rabid fan, maybe he's trying to show to Kirsten Dunst that I don't need you no more ho cos I gots me a puggle or maybe, just maybe, he likes the way he feels so very soft against his skin. Now Jake, these are all justified reasons for keeping your puppy five feet off the ground at all times but don't you think at some point, soon, you're just going to have to let go? Literally? Being a parent is tough, I imagine, and watching those kids fly the nest is always hard but it has to be done. So please, FREE BOO!

Please show your support by either commenting or tracking Boo down, grasping him from the clutches of Jake, fleeing away promptly and then placing him down on the sands of a nearby beach and skipping freely together in the gentle surf of the ocean, laughing as the sun beams down upon you both.

PICK A PECK OF PUGGLES
Beagle, pug mix smart, loveable and cute to boot
By JEN WEISSFor The Tennessean

Watch out, dog lovers. The puggle's here, and he's shaking things up.

Ever since last November, when Jake Gyllenhaal was spotted with his new puggle puppy, would-be dog owners have been going wild over the new hybrid. A cross between a pug and beagle, the puggle has the good looks of both dogs and is said to have a sparkling personality to boot. If you haven't seen one in your neighborhood yet, you will; these dogs are promising to be as big as fellow "designer dogs" such as cockapoos, schnoodles and Labradoodles (which, by the way, are SO last season).

See what you've done Gyllenhaal! They're everywhere! Now, don't get me wrong, I love Boo as much as the next blogger but something about taking two dogs that normally wouldn't look twice at each other and booking them in at the petshop Honeymoon suite so that they spawn a league of $1000-a-go mini-mes, just doesn't sit quite right with this Jake fan. But what do I know? Just look at how cute they are!

On a side note, cockapoos? pekapoos? schnorkies? And what about those poor Labradoodles? Not only do they look ridiculous and sound hilarious but now they're out of fashion? When will this madness end?

P.S When I did a google image search for "PUGGLE" the second picture it gave me was this:

How freaking cool are platypi?! They're like animals from a time before man. Upon reading the accompanying article I discovered that a baby platypus is called a puggle. Small world, eh?

IS THERE SOMETHING DIFFERENT ABOUT YOU?? 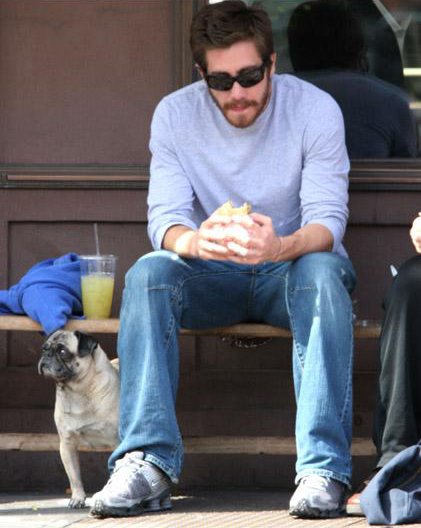 Jake rarely goes anywhere without adorable little Boo by his side so I automatically assumed that the pedigree pooch posed next to him in this picture was the subject of our sub-watch but something is not quite right. Unless Boo-ga-loo (go with it, people) has had some unfortunate accident involving his face and a frying pan or has been severely beaten with a ugly paddle in recent times, it must be some other dog. Hey, Pug-a-lug! I thought I went over this in Blatant Stalking # 3. Obviously you didn't give it your full attention. All this begs the question: where the fuck-a-luck is Boo?

PETER SARSGAARD NOT AT ALL IMPRESSED BY BOO 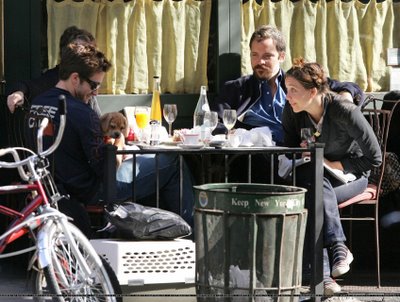 Boo is cute as hell. Jake thinks so. Maggie thinks so. Peter Sarsgaard thinks...oh wait, no. He's giving Boo the look you'd give a scabby pigeon if it came too close to you. The contempt, Sarsgaard. The contempt!

Boo writes: "Jake, my owner, told me about Boo Watch and I'll admit at first I thought what fucked up kinda mofo would write such pointless shit about some celebrity's hybrid designer dog but now I've come to see it as a valuable source full of insightful observations and witty commentary. I log on daily to confirm what I'm supposed to be doing, y'know, to check where Jake is carrying me today. Usually it's all harmless fun but now I see this! I always thought Peter Sarsgard really liked me; he is always telling me what an adorable little puggle I am and asking me if I'd like another biscuit. Thanks for shining a light on the truth for me Boo Watch, associated with Jake Watch, copyright 2006, all rights reserved. Now I know what I'm really dealing with. I have already pissed in this punk's shoes and wait 'til he finds what I did in his bed.
All my love, Boo Radley, Puggle and Cutie-Pie Extraordinaire."
(originally posted: 4/25/2006)

THE CASE OF THE MISSING PUGGLE

Ah, my favourite pug/beagle cross pollinated pooch has been spotted once again. Feels good. It's been a long time, Boo, shouldn't have left us without a dope beat to step to! But something is troubling me, dear readers. I was going over the delightful Gyllengroup shots from this weekend and I noticed that BOO HAD DISAPPEARED! MID-ACTION! How did this happen? Where is he in this picture: 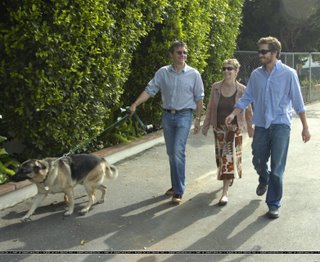 Well, I put on my Sherlock Holmes deerstalker (doesn't everybody have one?) and got down to some serious investigating. I soon located the problem, without Watson's help I might add, and the culprit responsible for Boo's mysterious removal is none other than one Atticus Finch Gyllenhaal!

Look at that! Trying to shove little Boo-ga-loo out of shot! Using his size to overshadow the wee one. Jealously, thy name is Atticus. Case solved. I'm off to smoke my dope and pluck at my violin so farewell until next time, mystery aficionados!
(originally posted: 5/16/2006)

Thanks to my father who informed me about this weblog, this webpage
is really awesome.

Look into my webpage ... best way to lose weight fast

It's awesome to pay a visit this web page and reading the views of all mates on the topic
of this article, while I am also eager of getting familiarity.

Hello, just wanted to tell you, I enjoyed this blog post.
It was helpful. Keep on posting!エルメス バーキン ヴォーガリバー

First off I would like to say awesome blog!
I had a quick question that I'd like to ask if
you don't mind. I was curious to know how
you center yourself and clear your thoughts prior to writing.
I have had trouble clearing my thoughts in getting my thoughts out there.
I truly do take pleasure in writing however it just seems like the
first 10 to 15 minutes tend to be wasted just trying to
figure out how to begin. Any suggestions or tips?
Kudos!