Sam Mendes, the J-Man and Sarsgaard all giggling away like convent school girls in a sex education class? What's going on? Caption it!

This week's winner will recieve this beautiful framed Peter Sarsgaard, circa 1985. Mulletastic! 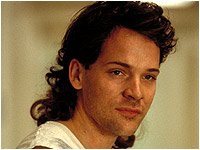 Posted by britpopbaby at 1:13 PM

wtbgirl said...
This comment has been removed by a blog administrator.
2:28 PM GMT+1

Look at Saarsgard with the Swayze-like "do," circa "Roadhouse." Rock on Peter!

Actually, I must admit I am strangely MORE attracted to Saarsgard WITH the mullet than present-day mullet-free Saarsgard. I'm not sure what that all means, but it can't be good.

However, this in NO way should be interpreted as an endorsement, of ANY kind, of the creation of a Gyllenhaal mullet, at ANY time, in ANY way, shape or form.

'Jarhead' Director Sam Mendes (left) talks about Hollywood Movie Star, A-List Hottie, and 'Jarhead' leading actor Jake Gyllenhaal (center), while Gyllenhaal and sister-dating friend and 'Jarhead' co-star Peter Sarsgaard (right) listen intently. Said Mendes, "Well, let's see: Jake and Peter didn't speak to each other for much of the filming of 'Jarhead.' Jake did beat the hell out of one of the supporting actors on the set. Sure, there's rampant rumors about Jake's sexuality out on the Internet, which are ridiculous because, straight or gay, that's his business. No doubt you've already heard when Jake was a teenaged lifeguard, he saved a jellyfish victim from a terrible allergic reaction by urinating on his or her jellyfish-stung leg. You probably also heard that, on a dare from a friend, Teen Jake stripped bare naked and slipped a speedo on at a Hollywood clothing store before running out (shoplifting) in all his speedo-clad glory. And, who knows if it's true, but I too heard about how Jake and Kirsten, back in the day, got downright dirty (yum) inside a dressing room in a high-end L.A. store. Yes, Jake's played some really out there characters -- a really weird (but sweet) momma's boy in 'Bubble Boy;' the smoking hot, heroic son of Dennis Quaid in 'Day After Tomorrow,' the bright and troubled teen who talks to a giant Rabbit in 'Donnie Darko,' Jennifer Aniston's plaything in 'The Good Girl,' and the never-to-be-forgotten achingly beautiful, seductive, alluring (and naked) gay Cowboy in 'Brokeback Mountain' who Heath Ledger fell for heart and soul. But, there's more to Jake than all this. Jake's a really sincere, friendly, nice guy. You don't see him out there sleeping around with everyone (who obviously want to sleep with him) because he's a good kid who respects himself and wants more meaningful love in his life. He's a great actor and when I asked him to give me Jarhead grit and grunt, he gave me more than I could ask for. And when I asked him to shake his sweet little ass and give new meaning to Christmas, he didn't leave me disappointed. In fact, I believe the Santa Hat dance will be one of those classic movie moments. But more than that, Jake Gyllenhaal is--and I say this from my heart--one helluva nice guy who everybody loves and I could tell you a few stories that might actually embarass and shame him -- but if none of this has, well maybe not. Enough said, he's simply an irresitible guy with loads of confidence and living his life the way he wants and deserves, and WE ALL LOVE HIM!"

In the waiting area at Britpopbaby’s local police station, the three culprits of Friday's midnight mishaps still seemed very pleased with themselves, although now that the illegal substances were wearing off, they were beginning to wonder where their trousers were.

While on location filming "Jarhead," its principals were infested by lice, which caused them considerable smarting & itching during the subsequent press junket. Mendes, Gyllenhaal and Saarsgard demonstrate, respectively, the upper lip scratch, the chin scratch and the head scratch. A third "Jarhead" cast member, Jamie Foxx (not shown), was scratching something else entirely, which was deemed unsuitable for viewing on a family-oriented blog.

That made me laugh - we're one hell of a dysfunctional family!

You could either have the short whitty version:
Sam:"You wanna know what happend at the hotel in Mexico?!"
Or you could have the longer verson:
Sam:"You wanna know what happened at the hotel in Mexico?! I will leave you to answer that one Peter"
Peter:"Ummm, well.....I figured if I couldn't be around my girlfriend, I would settle for her brother and settling consisted of whipped cream, and cherry flavoured...."
Jake:"Hehehe he said whipped!"

I have started noticing a patern about my posts; they all seem to involve Jake and Peter doing something with whipped cream and cherry flavoured...

Mendes: "...and the sand got into EVERYTHING! Back me up here guys."

Jake: "Yeah, it chafed. But, you know, in a good way. Hey Peter do you remember rubbing the ointment onto my ba..."

Mendes: "...and then Jake said "Pull this one it's got a Santa hat on it!" and we laughed and then Peter pulled it."

Peter: "Look, Maggie I can explain."

Sam: So when we got out into the desert the temperatures were absolutely soari.....er, Jake, why is Saarsy doing his chimp act again?

Jake: I dunno, but being this close has sure made me realise the importance of washing after we'd finished filming out there

"So tell us, guys...Who's the loudest masturbator?"

"Sam was unaware that Jake and Peter had already told the journalists about the events of the "Santa Hats Only" Wrap Party."

Sam: "So I said to Jake, 'Look, we'll just splash some bottled water on your crotch for the I pissed myself scene, easy-peasy, lemon-squeezy', but he was having none of it, he insisted on weeing himself and not only that, he, er, aimed to get the perfect "spread". So what should have been a one-take, five second scene turned into an afternoon. I was just doing a series of quick shots that day so I bemusedly let him do it. Right, Jake?"

Confused Reporter: So, how were the kissing scenes

Sam: Well, I feel what the boys got up to on their down time was their own business...

Confused Reporter: Oh this is NOT the Brokeback Mountain press junket *whew* Erm... what were you saying Mr. Mendes?

I wonder if they know what we've really done on set?....

so many men, so little time.

SAM: Stop me if you've heard this one... two cowboys walk into a tent...

Sam Mendes, Jake Gyllenhaal and Peter Sarsgaard share what seems to be a private joke mid-press conference. It all started when Mendes said "The Mexican Santa shaved off his beard" that sent Gyllenhaal and Sarsgaard into fits of laughter. Seen here are the trio moments after, Gyllenhaal in a dreamy mood and Sarsgaard with a confused expression.

Can I say that Peter looks blazing hot in this photo? Just had to add that. The mullet photo is ... unfortunate.

Mendes: I think I'm wairing two different kind of socks today
Jake: Hi hi, he's wairing two different kind of socks today
Peter: What is this itch I'm having, it's killing me.
Mendes: Yep, blue and pink, just my luck. Should I call Kate about this. (sighs)
jake: Hmm, pink, well that sure brings me back a happier place when I once got to spend some quality time on a mountain ...(stares into space with a smile on his lips)
Peter: Damn you wash and go, you ain't worth sh*t.

I'm so voting for that one!!

This will not really work, I think like this.