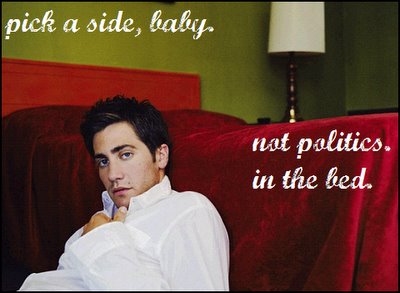 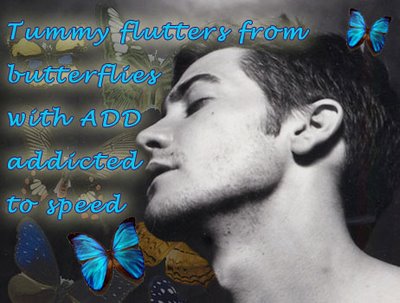 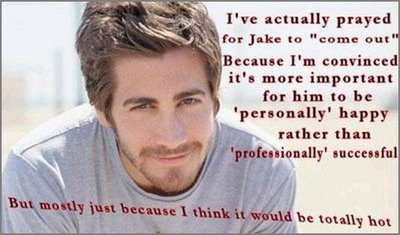 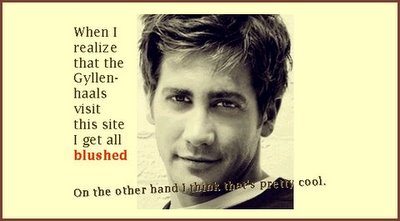 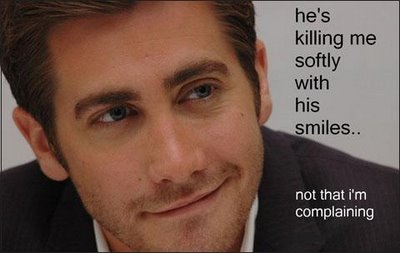 Awwww to the first one - that's so cute! I might try that one next time I'm bungie-jumping. ;D

And the second one is sooo funny! Sorry if it's not meant to be, but well... I can't blame you. He's perfect.

I have a flying phobia. I don't get on planes. But I actually think that the trick on card one might work for me. Way to go with the fake Jake conversation! :)

Im going on a plane soon, good idea!! im sure it would work, what did you chat about!? And to the second one.. was it better than normal? tehe!

For example Jake gave me a crash course on how airplanes work you know, like how the two main forces at work when a plane flies are

...that really took my mind off the scary things. And yes, he really is an lovely guy in person.

Jake, lift, thrust...those three words together would be enough to distract me for a flight around the world.

These are GREAT! I love the pictures everyone is using, too!

My God, look at those eyes in that first postcard. He's more than a little bit overacting "the childlike wonder of the season's first snow" aspect. But oh, those blue, blue eyes. He is so aesthetically pleasing, in so many ways, that sometimes I think I won't care if it turns out that, in real life, he has an utter aversion to vaginas.

I have done the first one, too. It works!

LOL at anonymous just above me :)

That first card is the best yet, it made me gasp, it's so pretty. And darn cute with the little plane!

I love the first card! I have discussions with Imageinary!Jake too. Usually stupid little things to get me through a boring long day. I should try it on the plane though. Hate flying.

Beautiful secrets... chatting for 2 hours in your mind with Jakey... that's almost more 'severe' than pretending having sex with him instead of with your boyfriend :o)

lol, I'll have to try the plane thing! Flying scares me too.

The scary thing is that there is a guy in my dog run that looks an awful lot like Jake, it's a bit startling, he even wears similar sunglasses - last weekend my friend said to me "You should go for that guy and just pretend it's Jake."

I wish I could tell you I wasn't considering this - LOL. Lord, I need help.

What! Anyone who barely resembles Jake must be worth a shot! I suppose after a while you could start to appreciate him as his own person instead of his simlarity to Jake...if not, make him change his name. :)

In postcard No. 1, is anyone thinking of "King Kong" just a little? Only much handsomer? (Maybe it's just the facial hair.) I think the plane would make a nice Italian sub for Jake to consume.

"...is anyone thinking of "King Kong" just a little? Only much handsomer? (Maybe it's just the facial hair.)"

LOL! I was thinking that when making it...

Thanks Brit! I needed the show of support for my *cough* addiction to all things Jake, even chasing after Jake doppelgangers. If you can believe it, fake Jake even has a frigging puggle (!!!!!) altough he is lacking the resquisite German Shepherd companion.

That is freaky! Maybe he is styling himself on Jake? Does he have cupcakes yet?

No confirmation on the cupcake situation but I'll be on fake Jake recon this weekend. He's new to the run and his puggle has taking a liking to my dog, so I expect First Contact fairly soon.

No confirmation on the cupcake situation but I'll be on fake Jake recon this weekend. He's new to the run and his puggle has taking a liking to my dog, so I expect First Contact fairly soon.

You got a spy cam? We need pictures!

wtbgirl said...
This comment has been removed by a blog administrator.
6:07 PM GMT+1

"You got a spy cam? We need pictures!"

I think I should draw the line at turning myself into a fake paparazzi taking pictures of fake Jake! LOL