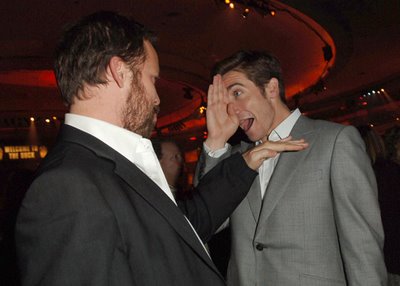 NEW YORK - Peter Sarsgaard got a new roommate to prepare for his role as a Marine in the Gulf War drama Jarhead.
The 34-year-old actor plays Jake Gyllenhaal's sniper partner in the film adaptation of Anthony Swofford's memoir, so he decided to spend as much time as possible with him in real life, he told the New York Times Magazine in Sunday's issue.
"I figured if I couldn't be around my girlfriend, I would settle for her brother," said Sarsgaard, who's dating Maggie Gyllenhaal. Sarsgaard and Jake Gyllenhaal lived together for about five months during filming, mostly in a hotel in Mexico.
"The idea was to simulate the military experience: what happens if you're forced to be with someone every minute of the day and night," Sarsgaard told the magazine. "And we fought. We'd have a fight and then we'd still have to be together. For a while, I would just wear headphones. All the time. That lasted for 10 days."
Order was eventually restored, he said.
Sarsgaard said he hurt his knee and ribs during filming, but shrugged off the injuries as part of the "endurance test."
"It's hard to complain because I'm an actor and not an actual soldier," he said. "I want to be very careful and respect the fact that there's really a war going on."
Sarsgaard's film credits include "Kinsey," "Garden State," and "Boys Don't Cry."

The idea of Peter Sarsgaard and Jake living together does bad, i.e good, things to me. It makes me have bad, i.e good, thoughts. You may discuss things they might have done in their time as roomies. Like showering together and making cheesecake.
Posted by britpopbaby at 8:33 PM

Perhaps an incident with the misuse of chocolate syrup? HMMM??

That story will never be old to me. I always liked the thought of them "together". Heh

"Making" "cheesecake", arf, arf, woof! ;) Dial down that testosterone, boys! But seriously, I could see them making an actual cheesecake together and arguing about whether it should be cherry or lemon tonight.

The headphones for ten days episode made me laugh. As much as we love our gregarious boy, you just know there'd be "too much Jake in the room" at times.

I REALLY wanna know what thet argued about...and then how they made up. :)

Jake got on Peter's nerves I'm sure. He's so happy puppy and Peter is such a sly dog. I also get the imperssion that Young Master Gyllenhaal is a total attention whore. Total. So yeah, I could see them arguing but then Jake is so adorable one can't stay mad for too long. They would kiss and make out.. I mean up eventually. Did I ever mention that the one person I like to see him in photos with more than Austin is Peter? Complicates things because I like Maggie too but damn if her man don't look better with her little brother...okay I'm sorry. I'll stop.

Jake "happy puppy" Gyllenhaal and Peter "sly dog" Sarsgaard - that's so it. In canine terms, that is, hehe.

Did I ever mention that the one person I like to see him in photos with more than Austin is Peter?

I understand, I have no interest in Austin but Peter...oh yeah. And I have a slight crush on Maggie (watch Secretary!) so it complicates things oh so much. I just want to go round for dinner and then grope them all.

Peter's drawing from the same well as Alan Rickman. The I-don't-quite-know-what-it-is-apart-from-the-hypnotic-voice-but-DAMN well. Ok, I need to be done on this particular thread, hehe.

That is some serious secret language they have going on in that picture there.What do you think they are saying to each other....Actually, let's not go there!

What really made me laugh was where it said they stayed in a hotel in Mexico. Make that a Wyoming Motel and my mind will litterally explode!

I wonder how Peter hurt his knee and ribs? What I am picturing is some whipped cream, Jake and some cherry flavoured.....Alright I am stopping!

Right after this Sarsgaard is off my list...mmmmm Whipped cream! Damn him now my list is just a plain napkin!

Heh, that was funny Miss Twist. I like when a joke becomes a motif. :)

ooooohh... I can imagine the both of them coming home sore from the physical demands of a long day of filming. Maybe an I massage you-you massage me dialogue transpires. One thing leads to another...ummm...I gotta go something suddenly came up! (which is weird cause I'ma chick)I really need to practice typing with one hand!!;)

"I figured if I couldn't be around my girlfriend, I would settle for her brother," said Sarsgaard

Regardless of what went on that hotel room (and I like to imagine it involving padded handcuffs), that statement is a prime example of why actors need publicists.

Oh man. I SOOOO didn't need the information that they spent months in a hotel room together....

"too much Jake in the room..." LMAO! I can totallly see that!