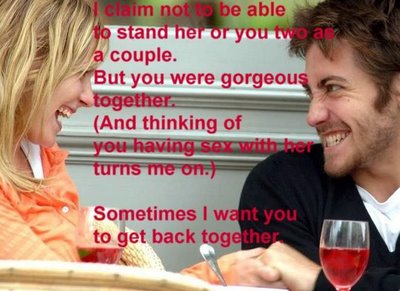 Posted by britpopbaby at 1:33 PM

The second one is totally ewwwww. Really, I didn't need that visual.

The second one is funny as hell but yes, [b]queen[/b] there is a blechy quality too. When I picture Jake having sex it's with someone who I find sexy. Sometimes male, sometimes female. Ummm heh

I know! But that picture is really cute. Lucky biatch.

I love the Vanessa Carlton song from which the lyric on the first pic is taken - a supremely guilty pleasure for a girl raised on Motorhead and Led Zeppelin. I'd walk an endless amount of miles if Jake was at the end of them, although he'd have to bear with me while I burnt my trainers and indulged in a foot spa.

Squall that is really bloody funny.

ok, i must admit I dont like to think about him having sex with ANYONE exept 4 me(which is SOOO going to happen:-) , but I liked the honesty of that second one.

Cor blimey guv. That second one REALLY was a secret wasn't it! To paraphrase the good doctor Sigmund Freud - Better out than in.

The Bearded Lady said...
This comment has been removed by a blog administrator.
3:13 PM GMT+1

I love them both. Especially the one with K+J on. I so agree. TUrns me on to think about them. I also sometimes want them back together! Maybe it will happen..who knows..

WHOA on the second one! Helluva secret! That pic is cute, imo. I can agree with the first one, too.....I'd need at least a week of major pampering from the Gyllenhaal after that, tho.

I gotta agree with queenscroft on the second one. Really TMI. And the picture kind of freaks me out... so much teeth!

Actually, I've seen other candids of them together and they were really sweet.I don't care for her bcz she broke up with him.Said he was boring. And truly, she has no class. None. I'm glad that he's back in LA while she's filming in NYC. I got a little queasy there when they were both in NYC at the same time. Ewww! But I do want to see him WITH someone..someone WORTHY. I liked the idea of him with Natalie Portman. They are both exquisite. Otherwise, there's always me....

The 2nd one... err... I don't get it. Nice picture though, Jake couldn't be cuter. But there's no way I'd be turned on thinking Jake doing it with Kiki... Heath, maybe... OK, Austin is fine too.

I agree with so many of you. Squallcloud - I, too, only think of Jake with people that I find sexy and sometimes that is a male also. I never think of him with Kirsten. Complete turnoff. Anon 8:38- I was getting kind of sick to my stomach also thinking about him being in New York now that Kirsten is there. I believe he is still vulnerable when it comes to her. But she definitely doesn't deserve him. I said once before that it says a lot for Jake's character that he could love her so intensely and for so long. But she had him and she basically threw him away. She doesn't ever deserve to have him back! As for that second picture.That person had guts to be so honest. Good for them.

The lyric from the first one is from one of my favorite songs. :) I dunno, the second one doesn't bother me. I try not to picture Jake with any woman besides myself, lol, but I could kinda see the point...

The very thought of Jake having sex - period - turns me on....

And the first one - I SO agree.

@ Cina: I KNOW!! Like that scene in "The Good Girl" when Holden and Justine are going at it at the hotel... OMG!! And that's only acting!

I can't wait till he has someone new and who is his peer who is not crazy to break up with him. I'm tired of seeing their old pictures because frankly she use to go out with him but she has nothing to do with him anymore and I wish everyone would move on. She scares the crap out me because how in hell can she not be with him.

Her hair is so greasy in those photos I'm nauseous. Only photos I want to see him anyone is Heath or Austin. I'm a dreamer I know.

The Kirsten saga just serves to further humanize Jake in my eyes. This continual longing after one's over-idealized ex seems so common -- I wonder if Jake has done some drunken dialing of that particular number? But if it lasts too long, it begins to seem pathological, as if one's obsessed and can't move on. Or that one's using it as an excuse to keep from moving on. Or to cover up ... other activities, you bad Jake, you.

The second postcard fits my libido mood, too, but I suppose you already know. I hope you post my postcard of Jake soon, britpopbaby.

i dont think kirsten dunst is near hot enough for him and it depresses me that she only got a chance with him because she is famous! if she wasnt famous im sure he wouldnt even give her the time of day! jake should look outside the hollywood box!

i dont think that kirsten is near hot enough for jake and it depresses me that she only got a chance cuz shes famous if she wasnt famous im sure he wouldnt even give her the time of day! i wish jake would look for a girl outside of the hollywood box!