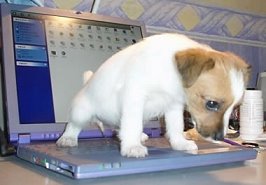 It's me, Terence. I'm the Jake Watch office manager and usually I'm totally on top of things but last night I went out for fatijas and when I came back, everyone was gone. I thought maybe they'd gone for a drunken joyride in the helicopter but they usually save that for Mondays. I checked the hanger though and the 'chopper was still there. I thought it was odd but sometimes things get a little unpredictable when you work for the world's top Jake Gyllenhaal protection agency.

This morning I went to give britpopbaby her usual gin and cornflakes and found her office completely trashed. I mean, it's normally messy but this was different. I thought she might have totalled it in a fit of rage or something so I went to see if I could find her in the bar. On my way I passed Survelliance Room 3, that was ransacked too: 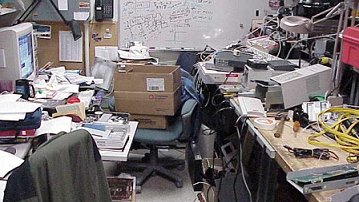 Prophecy Girl was supposed to spend today fixing the vault after yesterdays security breach. When I got there her tools were scattered everywhere and EVERYTHING was gone from the vault: the golden sneakers, the Cantara files, the gin, our first edition copy of Claptrap, the cloning syrum, the gin, the memoirs, the blueprints, that Oscar we mugged Clooney for that we were going to give to Jake (remember? when we accidentally killed his pig?), the master key and the gin!

The secret back door to the vault room had been smashed in so I took a look outside and saw a load of tyre tracks that had straight up ripped through the Oriential relaxtion gardens with the wind chimes and the Buddha fountain.

Well, I'm seriously spooked now. I can't even find Lt. Dan. I thought about calling Jake but I'm not really supposed to contact him ever since I mistakenly pinged that elastic band in Boo's face.

I don't know what to do. I don't understand whats happened. We were having a few problems with security this week but britpopbaby and Prophecy Girl were handling it. Help...
Posted by Terence at 11:03 AM

I hope BPB have some extra Gin somewhere... If not maybe you can distract yourself with this:

Damn. This is serious shit indeed.

And I still wonder where the heck our street sweeper is. I can't get over that. We still have unibike, don't we? Please don't tell me that's missing too!

And Terence - have you been peeing on the laptop AGAIN?! >:(

Terence I'm with Cina you can't keep on peeing on the laptop!

Missing gin is always a call for a crisis, almost as bad as missing rum. . . gah total bummer

Terence! I can only imagine how upset you must be! But nothing in your training should indicate to you that peeing on the laptop is ever acceptable behavior. Jake Watch agents are trained for stress, that's why the gin, silly! The only thing I can suggest is that you stand your post until relieved. Clearly, I think, and this is just my very HO, this looks like the vilest corporate treachery to me.They will stop at NOTHING to prevent Jake Watch: The movie, from being made!!! If these rumors are true, it explains why Eva Green was stalking Jake at the Farmers' Market this morning.

Terence...can't say for sure but Mattie McBongo was seen in the area
(always high on life that one!) pounding on doors looking for gin. Go get in a zen like state and infiltrate his compound! The GIN MUST BE RETREIVED!

Oh Terence what can I say – looks like you have been abandoned!

Well you really should have taken notice of the memo’s asking all Agents to only leave messages on “Post it Notes” – the little “messages” you were leaving had become quite a cause for concern. I mean, the cleaning bill must have gone through the roof, and there is only so much you can do for that lingering odour with a bottle of Febreeeze!

What with that, and the rumours of your late night excursions down the canal tow path, hanging round with all the loose bitches – maybe the Boo incident was really just the last straw!

Was that your P45 on the desk in surveillance room 3?

cina said...
This comment has been removed by a blog administrator.
5:06 PM GMT

But Terence, have you forgotten everything Agnes and I taught you? Need a brush-up? Well, you know where to find us don't you? The Dog Spa hasn't moved. Why don't you come by Monday, I'll get you those Sniffers you like so much! And if you're lucky, Boo will be here too! ;)

And I still wonder where the heck our street sweeper is. I can't get over that.

I KNOW, me either! I miss it! It's like my favorite vehicle. Way more fun than the chopper IMO.

Yeah, this is so not good. Terence, didn't I tell you to lay off those fajitas?! Dammit.

I KNOW! We need the street sweeper - it's an essential part of our undercover surveillance. Although I wonder sometimes if Jake suspects anything...after all, he does have the cleanest street in America!

Oh and Terence...inhaling fax toner won't help. I know it might be fun, but you've got to keep your wits about you at a time like this!!

Did anyone find Brit's Gin bottles?? You know how cranky she gets if she doesn't get her gin and cornflakes every morning... I just can't deal with the fuss.

ooops! sorry... i think i drank all of the gin. by mistake of course - thought it was my cough syrup. :)

and you know, it made my night shift very very interesting. and i really didn't want to crash that car, trash the office or smash in the back door.

Dude sorry that was me that when through Brits's office! I was looking for my copy of GQ!

oh, and you might find Lt. Dan gagged and chained in the vault. he deserved it - wanted to drink my gin and eat the cat. also accused me of pissing the the laptop.

and you may find the oscar in the bushes outside HQ - it broke when i hit Lt. Dan on the head... and i didn't know it was cloning syrum when i drank it... it won't happen again, i promise

Okay, that's it kaydee. You're off the night shift from now on! ;)

Good Lord ! The office actually looks CLEAN by my standards ;) (you should see my room ...)

I have the Agent Trampoline ready for launching the almost-ready Agent jet rocket packs ... hopefully I won't get smashed in to the wall this time ...

Commercial interruption: Can I just say. I really, really loved the scans. But, today, after searching thru a half dozen stores,I finally have my very own copy of GQ. And the scans do NOT do him justice. These pictures are awesome. Unbelieveable. He is beautiful. He's makes-my-heart-ache-beautiful. Thank you, Naomi. Thank you, Stephen. That is all.

Scuse me I got a go check my whiskey supply.

can we register on the new forum or not yet?